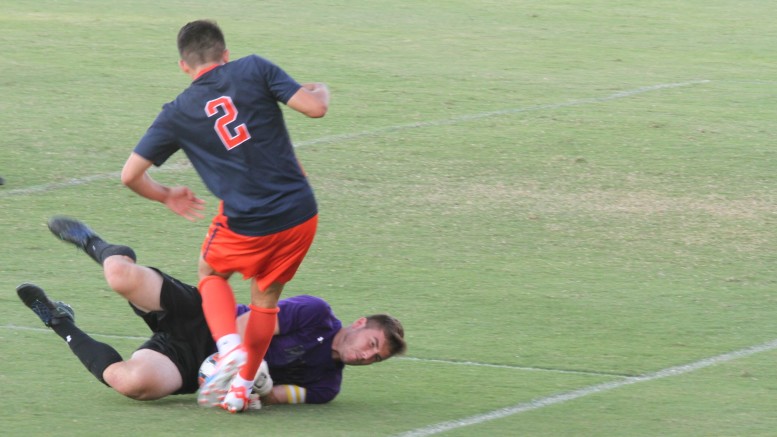 McDaniel's Nick Over makes a sliding save during their Sept. 27 loss to Gettysburg. Photo by Atticus Rice.

Both the Green Terror and the Bullets were set in a scoreless deadlock for the entire first half before Gettysburg’s Patrick Santini headed a goal early in the second half.

The lack of scoring did not reflect the intensity both teams played with as emotions were on display throughout the game. Four McDaniel players were tagged with yellow cards by the team of referees.

“It was a typical Centennial Conference game, that is why it’s ranked one of the top five conferences in the country,” head coach Steve Corrieri said. “There are no easy games and if you’re not emotionally ready for it you’re going to get destroyed. That emotion out there matches some conference’s emotion in the playoffs.”

The fierce competition of conference play was seen among players as they looked to leave everything on the field.

“Everyone gave 100 percent and did very well,” McDaniel goalie Nick Over said.

Leading the effort for McDaniel’s offense was Dominic Byerly who fired the Green Terror’s lone shot on goal which ricocheted off the post before being saved by Gettysburg. Defensively, Over served as an anchor in goal with two saves against the Gettysburg attack.

“We got nothing to be disappointed about,” Corrieri said. “We just got to keep doing more of the same and [I] believe our quality will shine through.”

Despite strong defense, Gettysburg led McDaniel in shots, firing 16, three on goal. Santini led the Bullets with four shots and teammate Lucas Weissman followed with three of his own.

With the loss against Gettysburg, the Green Terror look eagerly to rebound Saturday against Washington College (Md.) (3-6, 1-2) in another conference match. Game time is at 4 p.m.

“It’s a good game coming up for us next,” Over said. “We know that’s an opponent we can take on and get a result against.”

Out Pick Elec And Dan: Week 1