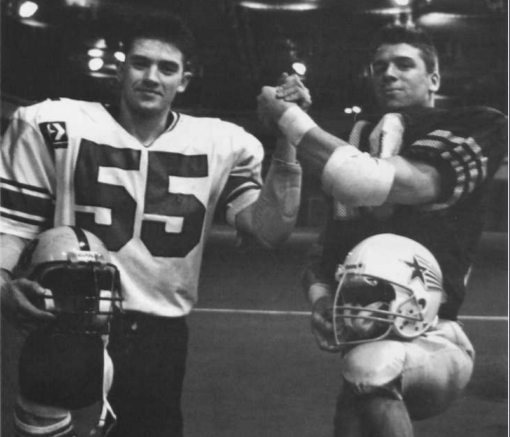 The sound of cheering cuts through the air. Another touchdown for McDaniel football. Thousands of people line the stadium and hillside either watching the game or getting involved in the famous tailgating. It’s football season once again at McDaniel College.

McDaniel College football has a long and prestigious history, well over a century in fact. It was established in 1891 when McDaniel faced off against rival Gettysburg College. The team had many fantastic seasons, going undefeated several times along with many championships.

In 1934, renown coach Dick Harlow received a telegram inviting his team to participate in the first ever Orange Bowl. Unfortunately, due to financial issues, McDaniel football missed their spot in history that time around. But in 1992, they didn’t miss a beat.

After the regular season in 1992, the McDaniel football team was given the opportunity to become the first U.S collegiate football team to compete on Russian soil.

The football team went to Russia in early March of 1992. The exhibition game between the two teams was played on March 17 in the Central Sports Club of the Red Army in front of a crowd of about 4000, and ended with a McDaniel 47-7 win against the Euro-Asian league All-Stars. The game was played indoors, so often kicks would hit the ceiling, and the Russian team had three different jersey colors for their one team, all of which made the game all the more bizarre and interesting.

“Everyone was really excited about it,” then-athletic director Rick Carpenter recalled recently. “Anytime you are first in line to do something that raises eyebrows like this, we were actually getting national attention for this for the first time since I’ve been here.”

It really was a big moment for McDaniel, the college received a lot international attention for its achievements. Several major newspapers such as the Baltimore Sun, the Washington post, CNN and NBC all did stories on the historic event. A USA today reporter from Moscow interviewed players, so it even made it into international papers.

Part of the reason this event was so monumental is because the Soviet Union fell only three months prior to the game being played, and even before that the U.S had been involved in nearly 45 years of tension with Russia during the Cold War. In fact, the fall of the Soviet Union nearly caused the game to get scrapped due to the instability of the country’s economic and political environment, but McDaniel persevered and the game happened.

Current football head coach Mike Dailey is optimistic about the future of the McDaniel football team and the potential for them to travel abroad once again. He has been a coach for 37 years and has been involved with a variety of programs and even has experience with running clinics in Barcelona, Spain.

“We have other priorities at the moment,” Dailey said, “Especially since I’ve only been the coach here for a few years, the budget, and a variety of other reasons. But I think it would be a tremendous experience for our players. McDaniel is a place that wants all students to be well rounded and have different experiences so I feel that the school would be behind it.”

Current McDaniel Punter Joey Cornwell is planning to do a short study abroad during the January term in Greece, but is all for the idea of the team traveling abroad to play.

“It would be a great experience to go out and learn about other cultures,” he said.

This year marks 25 years since McDaniel College football travelled to Russia. For now, the possibility of another trip in the near future is slim, as McDaniel football seems to have other things in the playbook, but it seems that coaches and players alike remain hopeful for opportunities down the road.