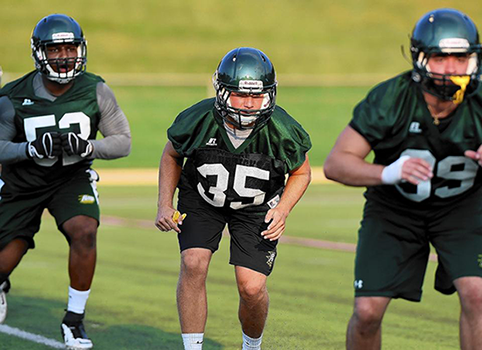 It’s Tuesday and it is the hardest football practice of the week as McDaniel gets ready for an upcoming game against Ursinus. Luke Fernandez looks tired, but he still has a smile on his face.

Why is he smiling? Because he gets to play a sport that he loves.

Fernandez started playing football at the age of four. He knew then that it was something he wanted to do for a long time. “I was very undersized when I was four years-old,” says Fernandez. “However, I knew right then that I wanted to someday play college football.”

Fernandez has played football in Carroll County for the past 16 years of his life. He grew up in the small town of Manchester, Md. Growing up, his parents encouraged him to be involved in athletics. Fernandez went to North Carroll High School for one year, and as he was a Manchester resident, he was transferred to Manchester Valley High School in 2009. Newly opened that fall, the high school had no seniors. Being an athlete for a school with no seniors was not an easy task.

“There were a lot of ups and downs,” says Fernandez, recalling the experience of being a sophomore playing varsity football. “It was a good but terrible experience. It was bad because we were so undersized and unable to compete against other teams. However, it gave us good experience playing on a varsity team at such a young age.”

Playing on the varsity team as a sophomore taught Fernandez a lot. Playing against older and bigger competition made him realize that one day, he could be able to play college football. When the time came to make a decision of where to go to college, Fernandez chose McDaniel College over Frostburg State, Lebanon Valley and Stevenson.

“I knew McDaniel had a high standard for academics, and getting a good education was very important to me. Athletically, I liked McDaniel’s Football coaches and I really bought into their philosophy,” Fernandez says.

College football was not an easy adjustment for Fernandez. The speed of the game was a lot different from what it was in high school.

“It didn’t go smooth,” says Fernandez of his first year at McDaniel. “Having to balance academics and athletics was something that was not easy. In my first semester, all I did was go to class and go to practice.”

After his freshman year, things started to go his way. Halfway through his sophomore season, Fernandez became the starting safety for the  Green Terror and has not looked back since.

Through three games this season Fernandez leads the McDaniel Green Terror with 23 tackles. He also has an interception.

Fernandez’s roommate, Marty Windisch, grew up with Fernandez and still plays football with him at McDaniel. “Luke loves the game so much that I knew that he would be successful,” says Windisch about Fernandez’s success. “He always works hard and is the ultimate team player. He is responsible for the success he has achieved.”

Fernandez hopes to keep up his successes. “I hope I can help be a part of McDaniel Football becoming a competitive program every year,” he says. “This next year and a half or so, I, along with my teammates, will do our best to help build a winning tradition here at McDaniel.”