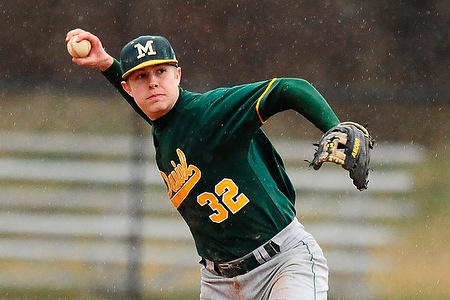 In Brownsville, Texas, a McDaniel alumnus signed a professional baseball contract. Marshall Betts ’14 journeyed after his senior year on the Hill to a Texas developmental camp to become discovered. Betts has always been known as an exceptional athlete, but it was his drive and desire to become the best he could possibly be that helped him land a career in baseball.

Betts’s story doesn’t begin at graduating college with his B.A., but back when he was three years old. Betts would go out to the field with his father and sister, while she trained he started working with the fundamentals of baseball.

Prior to high school, Betts was a multi-sport athlete, but baseball eventually became his main focus. “I excelled in not just baseball, but soccer as well,” Betts said. “Once I began attending Stephan Decatur High School, I dedicated my time to baseball.”

“As I got to my junior and senior year of high school, I was recruited by a few Division I schools, mainly just emails and phone calls with coaches,” said Betts. “I lost a lot of coaches’ interests after the discovery that I needed surgery on my shoulder during my junior year. Luckily, or so I thought, the coach at High Point University told me, ‘If you come and try out, I’ll give you a roster spot.’ That did not end up happening, as the roster was full when I got to school.”

This was a hard time in Betts’s life. He had to decide whether to give up baseball or transfer last-minute to another school. Betts decided to look at Methodist University, Guilford College and McDaniel College, all Division III schools. After contacting all three schools’ head coaches, only David Seibert, Head Baseball Coach of McDaniel College replied to Betts’s message. This made the decision simple for Betts. He transferred to McDaniel for the spring semester of his freshman year.

During his senior year, all Betts could think about was professional baseball. Thinking about what would happen if he didn’t get signed stressed him out.

“I couldn’t picture myself being a guy who would sit at a desk for eight hours a day to come home every day just to do it again,” said Betts. Baseball was always what he wanted to do for a living, and he realized that there was potential in playing baseball as a career.

After attending a developmental camp in Texas, Betts signed a professional baseball contract to play third base for the Brownsville Charros of United League Baseball, an independent baseball league based in Texas. He signed his contract in the second half of the season. In the time since, he has played first base, second base, third base, shortstop, left field and even pitcher–all in his rookie season.

2018 is a make or break season for the Orioles