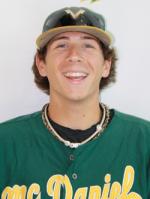 On Tuesday, April 2, Senior Patrick Christopher recorded his 146th hit for his McDaniel baseball career, surpassing Russell Coover as McDaniel baseball’s all-time hit leader. With two on in the top of the eighth inning Christopher crushed a ball over the right-field fence to give McDaniel a 9-0 lead over conference foes, Washington College. When asked about the record, Christopher said, “we got the win, that was most important, the record was secondary.” Currently McDaniel sits in third place of the Centennial Conference with a 4-2 record in conference play. With a team first attitude, Christopher is an excellent leader for the team.

Along with the McDaniel hit record, Christopher recently surpassed the program total bases and at bats records. Christopher is approaching several McDaniel program records, which he could quite possibly break this season. Some of these records include (Totals as of April 8, 2013):

A new era of women’s basketball