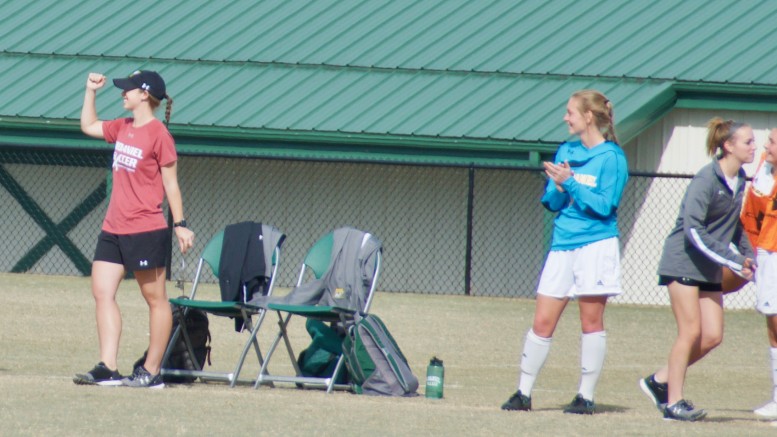 Since taking over responsibilities as Head Coach for the McDaniel Women’s Soccer team in 2012, Sandy Lagana has turned the program into a top 20 NCAA ranked team in just four years.

Lagana had an immediate impact in her first year as head coach by leading the Green Terror to its first seven-win season since 2006.

The following three seasons were nothing but impressive as she led the women to three straight ten-win seasons, appearing in the postseason each time. In 2015, Lagana was the catalyst for a 15-1-2 regular season, earning the team its first trip to the NCAA tournament.

Athletic Director Paul Moyer commented on Lagana’s impact, saying, “Coach Lagana has created an environment where excellence is expected in everything that is expected of anyone involved in the program – the players on the team, the assistant coaches, the staff, and certainly the head coach.”

Prior to coaching at McDaniel, Lagana was the head coach at Ferrum College for five years where she spent her time turning the Panthers into an excellent program.

During her time there, Lagana produced ten all-conference players, two all-state players, and the program’s second ever all-region selection. In 2010, the star coach guided the program to its best finish since 1998, tying their longest win streak at 10 games.

When asked about how she is able to be so successful, Lagana said, “Hard work and recruiting the right people for the program.”

Soon after hanging up the cleats, she started assistant coaching at Mary Baldwin University in 2005 and was quickly promoted to head coach in 2006. Lagana had a lot of pressure as a 25-year-old head coach for Mary Baldwin, saying, “The transition from player to coach was harder than expected. The toughest part was building team chemistry.”

To improve herself as a young coach she relied on watching the U.S. Women’s National Team and advice from her father, who still comes to every McDaniel home game.

Success came at an early age for the Sykesville native who graduated from South Carroll High School with valedictorian honors in 2000. After graduation, she attended Bridgewater College (VA) where she played soccer and lacrosse.

On the lacrosse field, Lagana earned honorable mention All-ODAC honors with 16 goals and 18 assists and was named to the IWLCA Academic Honor Roll in 2003.

Lagana graduated Bridgewater in 2004 with a Bachelor’s degree in communication studies. Following Bridgewater, she graduated from James Madison University with a Master’s in kinesiology and recreation studies, with concentrations in athletic administration and coaching in 2006.

Lagana has spent time coaching at her high school and clubs while also volunteering for the Soccer-in-the-Streets program as well as with the Washington Freedom of the Women’s Professional Soccer League.