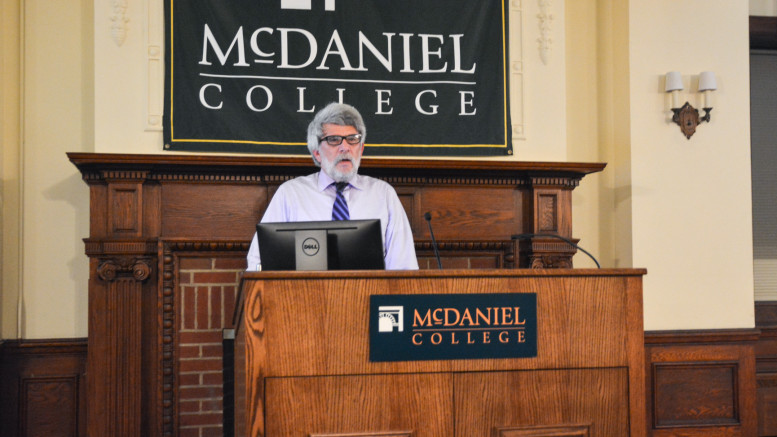 Peter Gorog speaks about his experiences in WWII. Photo by Kyle Parks.

Gorog was born in Budapest, Hungary on March 10, 1941. His mother Olga was a hat-maker and his father Árpád was an office manager; both were Jewish. At this time Hungary, allied with the Axis powers, passed increasingly anti-Semitic laws. Gorog stated, “the government did not trust the Jewish people.”

In October 1940, Árpád Gorog was taken to a forced labor camp to work for the military. Over 100,000 Jewish citizens were taken to these camps, with over 40,000 eventually perishing as a result. Gorog clarified the term “perishing,” saying, “Many of them were forced to deactivate mines in mine fields left behind. They were doctors and lawyers and had no idea how to do this.” Later in his presentation, Gorog went on to state, “They forced them to march to the Ukraine and if they fell along the side of the road they the office would shoot them.”

Gorog’s mother and father wrote postcards back and forth while Árpád Gorog was in the camp. Gorog’s mother kept a daily journal chronicling the life of young Gorog with the hope that when Árpád Gorog returned, he would get to know his son better. Gorog read aloud the last letter sent by each his of his parents, which was emotional for him and his audience. 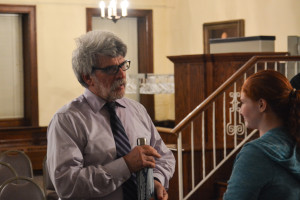 Gorog spoke individually with students after the event. Photo by Kyle Parks.

Olga Gorog received a letter in January 1943 stating that her husband was a missing person; he was never found. While discrimination continued in Hungary, she was able to work as a hat-maker until Germany took control of the country in March 1944.

The German government worked quickly, sending over 400,000 Hungarian Jews to Auschwitz. They forced Jewish people into the Budapest Ghetto. Each of these apartments was marked with a yellow Star of David, enabling Jewish citizens to be more easily identifiable.

Olga Gorog knew that it was dangerous for her and her son to live in the ghetto; the two moved in with a Christian family for several weeks. A “good neighbor,” as Gorog put it, reported them and troops took his mother away to a local jail. She luckily still had the letter sent to her about her husband by the Hungarian Government. She claimed to be a war widow and that a mistake had been made. Gorog said, “I am not sure if the guard felt bad and wanted one less person to die, or if he was afraid of getting in trouble, but he let my mother leave.”

Knowing that it was only a matter of time until another “good neighbor” reported them, Olga Gorog had to come up with a new plan. She met Raoul Wallenberg, a Swedish diplomat who bought apartments in Hungary to protect Jewish people. Wallenberg issued Schutz-Pass to deem targeted Hungarians as Swedish citizens, keeping them safe from persecution.

Gorog was safe until October 1944 when the Arrow Cross Party took over control of Hungary. They did not care about international opinion and began dragging Jews from these Swedish-owned properties and executing them along the Danube River.

Conditions were still tough after the war, with supplies and resources being severely limited. Olga tried to immigrate to the United States in 1946, but was unsuccessful. Gorog earned a degree in electrical engineering, and helped develop the first Hungarian-made computer. Fed up with the communist system, he eventually defected to the U.S. in 1980.

Gorog worked with NASA until he retired in 2014. He worked on projects such as the Hubble telescope and the JWST telescope. He now volunteers at the United State Holocaust Memorial Museum, where he tells his story so that, in his words, “This will never happen again.”