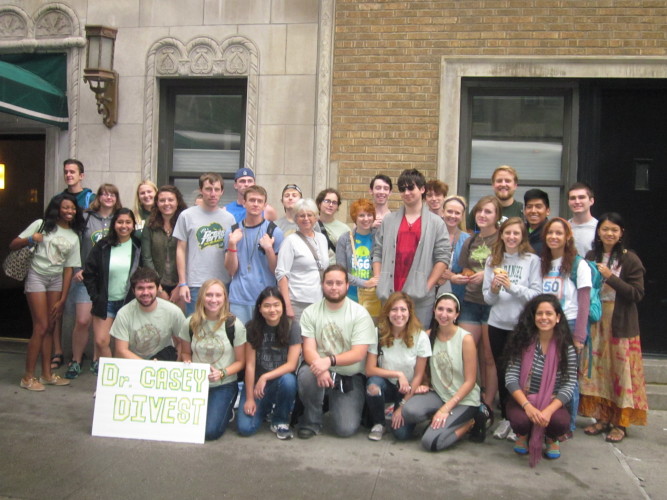 The People’s Climate March was an event organized by a coalition of organizations, both profit and nonprofit, whose purpose is to protect basic human rights. The purpose of the march was to promote environmental justice across the world, as well as to push political leaders into caring for the environment.

This march gathered nearly 400,000 people to the streets of New York, making it one of the greatest marches of our generation. The march featured a grand number of nonprofit organizations and other environmental groups, such as Polar Bears International, World Ocean Observatory, Women Against War, Peace Action, Energy Vision and many others. 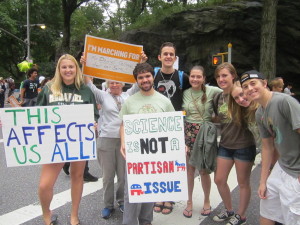 A group of McDaniel students at the People’s Climate March in New York.

Senior Amanda Fuhrmann was the McDaniel student behind organizing the mobilization of the McDaniel contingent to the march. Fuhrmann first heard word of the march through Facebook, but it wasn’t until a Neutral Milk Hotel concert at Merriweather Post Pavillion this past summer that she decided to attend the march.

“A few Maryland locals who had already started their part in organizing and recruiting for the march were invited on stage by the headliner to share the news of the march,” said Fuhrmann. From that point on, she started to communicate with them

She mainly communicated with Atid Kimelman at Energy Action Coalition.

“His role in the march was to coordinate with college representatives and insure their travel to the march,” said Fuhrmann.

Kimelman contacted her, asking if she could fill a bus of students from McDaniel to attend the march. From that point on, the movement to mobilize the students built momentum.

One of the biggest obstacles preventing McDaniel students to go the march was a financial one. However, Fuhrmann was quick in action and was able to fund the trip to the march. “With [the help of Atid Kimelman], I was given a $900 donation from 350.org to go towards the bus.  $500 was contributed by the Environmental Studies Department on campus and another $150 was donated by McDaniel’s environmental club, Green Life. This came to a total of 86% of the bus being funded by generous contributions. The remainder of the costs were funded by selling round-trip bus seats to students for only $15,” said Fuhrmann.

Without these donations, McDaniel would not have been able to participate in the march.

After finding the funding for the trip to the march, it was time to fill the bus with students. This was done in many ways. For instance, sophomore Lizzie DeRyke recruited many of the students through the Green Life club at McDaniel. Some students heard about the march through their environmental classes, but the majority of McDaniel students who participated in the march heard of McDaniel’s participation by word of mouth.

This march’s purpose was to change the future into something greener and more sustainable. The students who attended are proud to have been part of such a historical event, and McDaniel is proud of the activism of its students.

As Fuhrmann herself put it, “Our planet and its people are in incredible danger and it’s not too late to save it. We need to send a very important message to our world leaders and tell them what actions must be taken so that we can all live happier, healthier, and more sustainable lives.”

View photos of McDaniel students at the People’s Climate March.