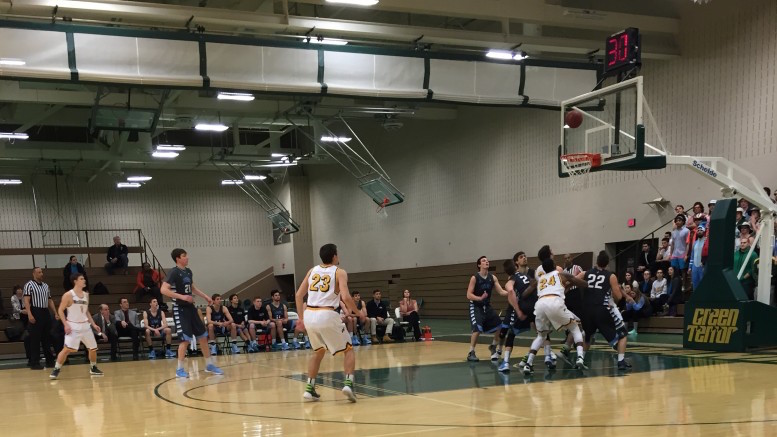 The Green Terror hosted the Johns Hopkins Blue Jays for the second time this season and walked away with a 60-50 win.

Senior Wes Brooks led the Green Terror with 19 points and 8 rebounds for the entire game while fellow senior Tim Stewart followed closely with 16 points and 9 rebounds.

The first half consisted of back-and-forth scoring early between the Blue Jays and the Green Terror.

Brooks gave McDaniel the lead 12-10 with 11:33 left in the half, and the Green Terror led for the rest of the evening.

In the second half, there was a seven-minute gap where McDaniel had no scoring opportunities, allowing the Blue Jays to lessen McDaniel’s lead.

As the clock winded down, the Blue Jays cut their deficit to 41-39.

With less than four minutes left in the game, junior Nick Perugino sunk a baseline jumper, which sparked a 7-point scoring streak for the Green Terror.

The Green Terror now stands fifth in the Centennial Conference standings with only four games left in the regular season.

Freshman, number 0, Isaiah Williams, offered up words of encouragement for the rest of the season.

“Last night was a big win for us,” said freshman Isaiah Williams. “It’s coming down to the end of the season and we don’t have much time left with our seniors, and we want to keep it going for them.”

“We have one goal, and that is to win a championship, but we have to take it one day at a time and one game at a time. With the team we have I think we can make a serious run in the tournament,” he added.