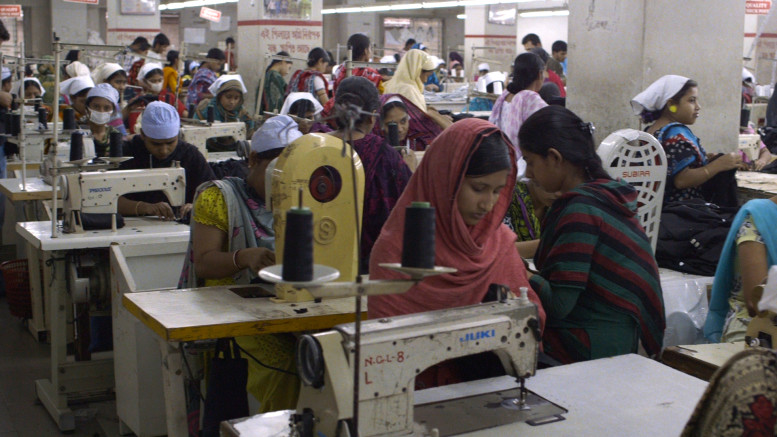 Photo Courtesy of The True Cost.

When meandering through a department store, it’s easy to be taken by a yearning for its wares. For many, it can be exciting to purchase new clothing and improve one’s wardrobe.

However, we often dodge any reflection on the clothing’s origin—it doesn’t magically appear on shelves and racks after all. Overwhelmingly, our clothes are manufactured in the far corners of the world in impoverished nations due to the presence of exceedingly inexpensive labor.

It was this important fact that students and faculty alike were able to reflect on in a viewing of “The True Cost.” The event was hosted by Global Initiatives and included a post-viewing discussion led by Dr. Sara Raley, associate professor of sociology.

“The True Cost” uses real footage from impoverished nations in Asia, giving a human face to the monumental labor force needed to feed the world clothing industry. A notable nation in this category is Bangladesh, which, at the time of the documentary’s making, offered the cheapest labor in the area.

It’s stated that manufacturing moved from country to country depending on cost, thus the managers of these factories, perhaps better described as sweatshops, had to cut countless corners. Of course, a primary cost is labor—workers only make the equivalent of a couple US dollars per day, sometimes even less.

Employers don’t even have the option to improve conditions. This led to extensive cutbacks, which can be linked to a multitude of deadly incidents in Bangladesh. In one instance, over 1000 workers died when a building collapsed.

Western defenders of labor outsourcing claim that it brings jobs to places that wouldn’t otherwise have any. However, the workers themselves, at least in the documentary’s depiction, are very fed up with their working conditions and abysmal pay.

“The True Cost” also shows the origins of cotton, a crucial material in textile manufacturing. Many farmers in India are suffering from exposure to pesticides and companies subjecting them to debt bondage, among other practices. Most shockingly, this has sparked alarming quantities of cotton farmer suicides, not to mention the widespread effects of pesticide exposure.

The harms, however, do not end with pesticide exposure. As part of the cutbacks that manufacturers must make to continue being the cheapest, there is an utter disregard for the environment. The Ganges River, for example, is polluted with countless harmful substances, some of which are very toxic to various forms of life. The documentary also states that the clothing is now the world’s second most environmentally damaging industry, after oil.

Moreover, “The True Cost” displays where our clothes go after we’re finished with them. It depicts landfills, where towering piles of textiles sit wasted. Even donating to charity causes issues for third world nations like Haiti. The nation now deals with massive quantities of secondhand clothing, which is mostly discarded and destabilizes domestic clothing markets.

A final aspect of the documentary is the marketing of clothing. Namely, the immensely deep-reaching advertising that we’re exposed to throughout our lives and the impacts of it. Often, consumer culture tells us to only buy, not use. In marketing, says the documentary, it’s not crucial for us to use clothes, but rather that we buy a lot of them. “The True Cost” elaborates on the practice of marketing to promote materialism—the idea that more possessions lead to happiness.

The documentary does show possible remedies to the current situation. These include clothing brands that actively avoid highly exploitative labor practices and environmental degradation in the manufacturing process, as well as organic cotton farming.

Overall, while clothing is an inevitability in society, it’s very important to think about the impacts of our consumption. We all share the world, however some of us are fortunate enough to have countless clothing options to consume, while others toil away to produce such items.