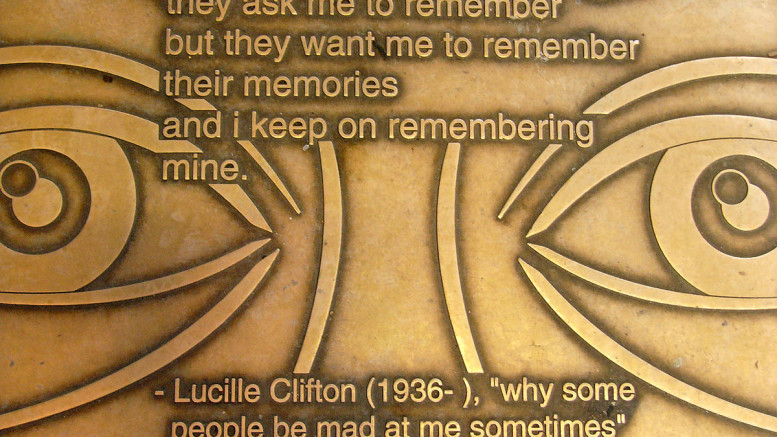 A plaque containing some of Lucille Clifton's work. (Photo courtesy of Wikimedia Commons).

Maryland is a geographically small state, but its history and legacy are as rich as any other’s. No one writer exemplifies the rich history of this politically, socially, and racially conflicted area more than poet and activist Lucille Clifton.

Clifton was born Thelma Lucille Sayles in 1936 in Depew, N.Y.

Clifton’s childhood in Buffalo, N.Y. was one filled with literature. Much of her parents’ earnings from their laundering and factory jobs went toward literature for Clifton and her siblings.

Neither of her parents had been formally educated, but that didn’t stop Clifton from excelling. Clifton flew through her primary education, and was accepted into Howard University at the age of 16.

After three years at Howard, she transferred to Fredonia State Teacher’s College. It was here that an appreciation for poetry began to sprout within her. Soon after, she married her husband, Fred James Clifton.

Clifton’s career choices shifted in an unexpected direction when she worked as a claims clerk in Buffalo from 1958 to 1960. But her love of poetry and literature persevered, and in 1960 she began work as a literature assistant in 1960.

Clifton’s poetry career began in 1966, when a fellow writer, Ishmael Reed, who himself is a celebrated writer and poet, took some of her poems to Harlem Renaissance leader Langston Hughes. Hughes included them in his collection, The Poetry of the Negro: 1746—1970.

Clifton moved to Baltimore the year after and stayed in Maryland for most of her life thereafter.

In 1969, Clifton published her first poetry anthology titled Good Times. It was subsequently listed as one of the ten best books of the year by The New York Times. Her career expanded from that point when she became a poet-in-residence of Coppin State University in 1971, and in 1979 she was awarded the title of Poet Laureate of Maryland.

Clifton’s career continued around both poetry and teaching. She signed on to the University of California, Santa Cruz as a creative writing professor in 1985. She earned the title of distinguished humanities professor at St. Mary’s College of Maryland, and in 2006, she accepted fellowship at Dartmouth.

Clifton’s poetry had a strong focus on describing the pressure and difficulties of being a black woman during the Civil Rights movement. Her fellow poet Reed and acquaintance Hughes supported this style of writing, and it came to a focus in her anthology My Black Me: A Beginning Book of Black Poetry.

Other themes common across her works were health problems and her ancestry as a member of the area now known as the Republic of Benin. Clifton’s utilization of the black female body as a source of power, pride, and inspiration is also prominent among her works, especially her poem “homage to my hips.”

Clifton passed away in 2010 at the age of 73. Her legacy lives on in African-American poets and writers, as well as in the Lucille Clifton House at St. Mary’s College of Maryland. Clifton’s poems can be bought at most major bookstores, but her influence has been felt far beyond the world of poetry. She has left her mark on decades of African-American cultural development in the United States, and her poetry is a clear expression of her desires to see African-Americans flourish.

Writer of the Week: Patrick Modiano