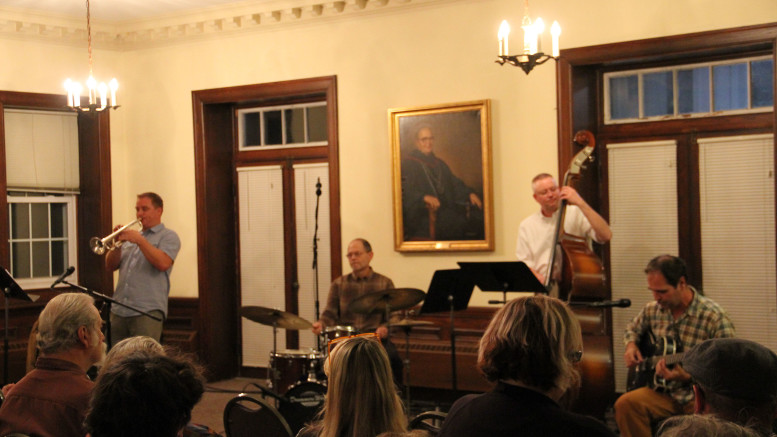 On Monday, Oct. 21, the McDaniel music department hosted the first concert of the year in the recurring “Monday Night Music” concert series, with a performance by the Tim Jenkins Quartet. This musical group is comprised of Tim Jenkins on guitar and voice, Jon Seligman on percussion, Nick Reider on trumpet, and Jeff Hiner on upright bass.

Jenkins also composed the nine pieces that the group performed. Three of the performers—Jenkins, Seligman, and Reider—all teach classes in the music department. The concert was about an hour long and was well-attended by students and community members.

Between songs, Jenkins introduced his fellow musicians, told the audience the stories behind the different songs, and shared information about upcoming concerts.

When asked his favorite part about performing, Jenkins said that “As far as performing, I like the idea of trying to reach something beyond the notes. It happens on occasion; the group gets caught up in something beautiful and unplanned. I like that. I’m also very grateful to make music with the guys and to spend time with them. The greatest reward I’ve ever received as a musician is simply the gift of being one.”

Jenkins is the director of the McDaniel Jazz Ensemble, and was glad to see many members of the group in the audience. Between songs, he said that he was excited for the jazz concert on Dec. 5 at 7 p.m., and hopes that the McDaniel community will come out to support the band.

The Tim Jenkins Quartet hopes to get in the studio and record a record by the end of the year.