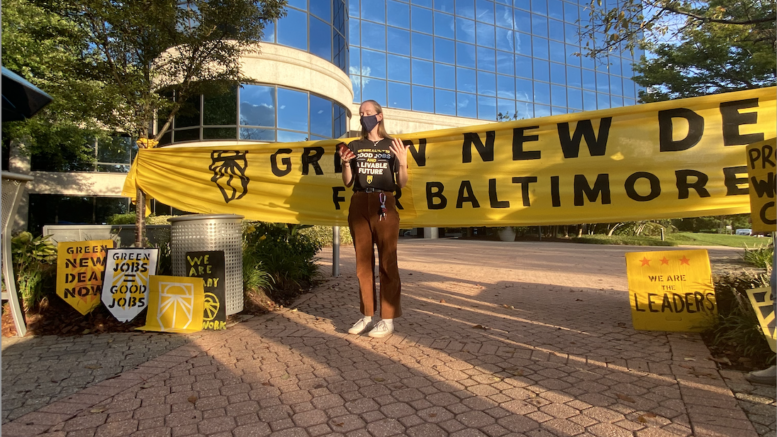 Kylie Baker speaks on the timeliness of a Civilian Climate Corps (Image courtesy of Niya Hanjar).

On Sept. 20, Congress went back to DC to make budget decisions that will shape future government investment. Climate activists mobilized across the country to demand Democrats in Congress pass a climate agenda and win the communities they represent a “fully funded Civilian Climate Corps and bold investment in renewable energy, public housing, transit, and schools,” publicized the Sunrise Movement, a national youth-led organization battling climate change and fighting for good jobs for all.

The Sunrise Movement initiated a national day of action on Sept. 20, decentralized across the country. Localized hubs of the Sunrise Movement showed up at the offices of their representatives echoing the published demands of Sunrise national and pushing state-specific climate agendas, headlined by support for a 3.5 trillion dollar reconciliation package and hesitancy for the bipartisan infrastructure framework (BIF), nicknamed the ‘Exxon bill’ by climate activists. The day of action was an extension of groundwork put down during the summer: teach-ins, protests and hundreds of mile-long treks in the name of environmental justice legislation.

“Congress needs to pass nothing less than the boldest climate action in the upcoming infrastructure bill. Climate action legislation should be a priority, and so far we have not seen it as such,” Sunrise University of Maryland organizer Niya Khanjar said. The reconciliation package being wielded as bold climate action includes the Civilian Climate Corp and a clean energy standard.

The Sunrise Movement hub at McDaniel College organized an action in front of House Representative Steny Hoyer’s Office. The action was led by Sunrise University of Maryland and Sunrise Baltimore and attended by Maryland Sunrisers, Food and Water Watch, Nuclear Information and Resource Service and a representative from the McKayla Wiles campaign, among other progressive Maryland allies. Sunrise McDaniel Hub Coordinator junior Kylie Baker, one organizer of the action, said, “it was amazing to see it all come together.”

Sunrise McDaniel member sophomore Bella Rain explains, “We are living in a time where we need to be able to decide our own future to ensure we have good jobs, including ones surrounding climate change action and a livable future.” Organizers are feeling a sense of urgency, citing the results of these decisions in congress and the big impact outcomes will have on communities, especially youth members.

“Unfortunately, [we] are the ones that will be impacted by the consequences of inaction. Despite the climate crisis being a consequence of actions by the generations before us, they will be long gone before the most serious climate-related events begin to happen,” Khanjar said. ”It’s important to take action for these causes because we only have a little time left before more climate damage becomes irreversible,” Sunrise McDaniel Action Lead sophomore Voula Papakonstaninou said.

While waiting for the vote, in the days following the Sept. 20 actions, progressive activists held a “People’s Watch,” standing outside the capital from 8 a.m. to 8 p.m., using their presence to support the backs of progressives, ask democrats to ‘hold the line’ and demand President Biden fulfill his campaign promises. Sunrisers not present continued to apply pressure: calling, texting and tweeting at their representatives, urging a fully funded reconciliation package be promised before the BIF is passed. While these two bills are entirely separate, they are linked politically, and obtaining pieces of the partisan legislation in the reconciliation package is proving to be a balancing act to avoid a federal shutdown that is known to result from partisan disagreements.

“It is our future that is at stake, and things are still getting worse. We need young people to step up and push for change, because nothing will happen if we don’t do it ourselves,” Khanjar said.

Interested in joining the fight for Green New Deal legislation? Join a phone bank at smvmt.org/gnd or contact sunrisemcdaniel@gmail.com to get involved with Sunrise McDaniel.