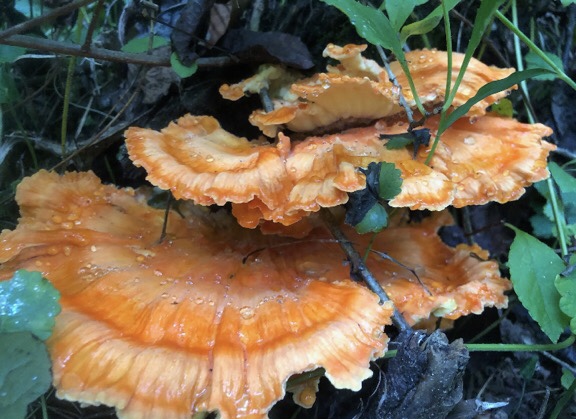 Chicken of the Woods (Photo courtesy of Erick Lowe).

If you were to ask me the best time of year, the answer is easily the transition from summer to fall. Of course, there are a ton of reasons, like the weather, the smell, the colors, but most importantly, you can eat like a woodland king!

Around this time of year, the natural world provides meals that rivals even Glar From looking to the trees for a quick snack (or remedies!), the bushes, or even emerging from the very ground itself, there exists shopping aisles.

Before you begin your journey foraging, be sure to keep in mind a few key points. This article presents to you potential plants available on campus and in the habitats around us – it is NOT a how-to guide. Make sure you always have an experienced forager when first starting out. Assume that things are poisonous until proven otherwise, and only eat what you know, prepared in the method you know will make it safe for consumption. With these points in mind, here are some of the best naturally found snacks I’ve seen on or around The Hill!

Of all of the delicacies around, my favorite has to be a large bracket mushroom, known as Chicken of the Woods (of the Laetiporus family). Blooming in late summer to early fall, this massive mushroom is bright orange, with no stems, and grows off of dead or dying trees. This cleverly got the name Chicken of the Woods, since the mushroom itself tastes and has a similar texture to chicken when cooked! A couple things to note, when foraging for this easily-identifiable fungus:

? While not inherently poisonous, there are debates about whether chicken of the woods that grows on coniferous trees contain acid of the conifer

? One major lookalike is the Jack-o-Lantern mushroom, which has bioluminescent gills and stems.

Another reliably safe find around the area are wood ear mushrooms (Auricularia auricula-judae), which, conveniently, have no dangerous look-alikes These mushrooms, which strongly resemble the shape of human ears, grow on dead or dying trees. If you’re in a pinch, these faintly flavored mushrooms will hold you over or make a great addition to a meal.

Oyster mushrooms (Pleurotus ostreatus) grow on logs like the rest of these mentioned mushrooms. They’re one of the only gilled mushrooms on this list, and probably the only one that can you actually be able to find within a store, and not only by foraging! Oyster mushrooms are grown commercially as well as naturally found, so you know they’re good enough to be mass cultivated.

No matter what you are cooking, mushroom or not, a meal is only as good as its spices. And what spice would be better than spicebush (Lindera benzoin)? This bush is currently fruiting red berries, which smell akin to lemons, and have the taste of allspice mixed with peppercorn. In addition, the bark, wood, and leaves of the plant have also been historically used in teas!

Another berry, this one being an invasive, is the autumn olive (Elaeagnus umbellata). This bush hails from China, and has tiny red speckled berries that are safe for consumption, although, admittedly, tart. As an invasive species, harvesting this actively helps the ecosystem you’re in.

So now, you’re probably thinking to yourself, “but Free Press writer, I can’t attain any of these because I’m on campus!” And to that, I’ll say a couple of things. First off, life is perspective, so fix that attitude! Second, and probably much more valid response, is just look around and look closely – the Hill has its natural snacks waiting to be found!

Here at McDaniel College, you can find Redbud trees (Cercis canadensis), a tree with edible flowers and seed pods. In fact, this tree is part of the legume family, so you can enjoy flowers in the spring, and beans in the fall.

Another great find comes in the form of a ground mushroom, commonly known as the puffball (several families of fungus fall under this term). These fungi grow close to the affinity houses on Pennsylvania Avenue, emerging after a good rain. While not poisonous, use caution when foraging for these, as poisonous young Amanitas are veiled and will look similar to the safe puffball mushroom. To confirm if they’re still safe to eat, cut open the large fungi and confirm that the center is still white. These are a great addition to soup, omelets, or can be a meal in itself!

The last item on the menu comes from one of the most common trees on campus, the Norway Spruce (Picea Abies). This is the main ingredient in Spruce Beer, for all of you brewers. The needles were commonly used in teas, or to make a syrup, both medicinal and recreational. Generally used as a throat ailment, this spruce can also be used for its resin, to heal skin irritations or lacerations.

As you can see, this time of year provides some of the best meals available, if you know how to look. With all of these options listed for when you can’t decide between Wawa or Glar, it’s crazy to think that this doesn’t even begin to scratch the surface of what’s available around us (Looking at you, walnuts, acorns, and other seeds)! Again, this article is merely a suggestion and tips to empower your own (safe) foraging journey, and should not be considered a comprehensive guide on natural eateries.

If you’re interested in foraging, whether for food, medicine, or just happy to identify, join Green Life! Our organization meets on Mondays at 5 p.m., in the backyard of 173 Pennsylvania Ave.