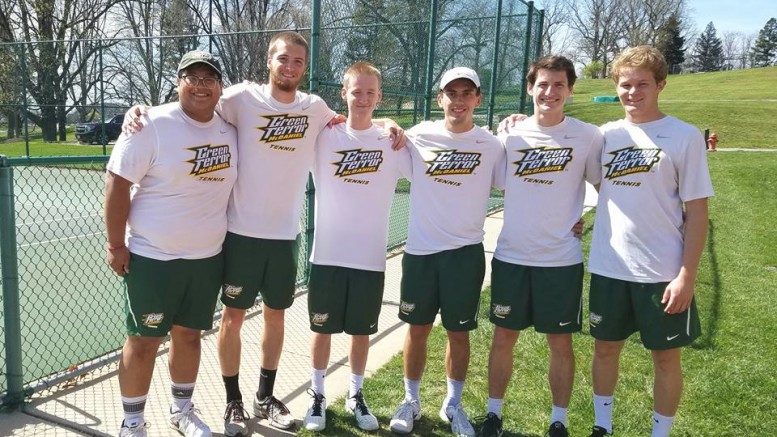 Will Giles with teammates from the men's tennis team. | Photo courtesy of Erin Giles

After former Head Tennis Coach Jason Clark stepped down from coaching before the beginning of the spring season, Graduate Assistant Coach Will Giles was appointed as the interim head coach.

As a former player for the College, Giles was a four–year member and three–year captain for the team. He was also viewed as a mentor to many of his younger teammates.

Outside of being a graduate assistant coach for the team, Giles’s other coaching experiences include coaching for his local team, which is based out of Cumberland, Md.

Despite being new to the head coaching position, Giles is changing the culture of the team, according to several players.

Shuck said that Giles is really making an effort to make his presence known. He hosts team meetings, contacts players individually, and gets them new team gear.

Senior Tate Myers admitted having to adjust to seeing Giles as a coach, since Giles is a former teammate to many members of the team.

“It was little strange at first, just kind of seeing him in that different [role],” said Myers. “But he stepped up into that leadership role really quickly.”

He explained that Giles’s former ties to the team help him with his coaching methods.

Shuck also said that Giles is more than a coach.

The transition is going well for Giles, though he did admit to running into some challenges.

“Our biggest challenge moving forward is gaining some players,” he said. “You need six [players] to play. We have six women [and] seven men.”

That said, Giles has been devoting a lot of his time to recruiting more student-athletes to play for the team.

Although he is an interim head coach, Giles said that the College will grant him another year as a graduate assistant coach should they find a permanent coach.