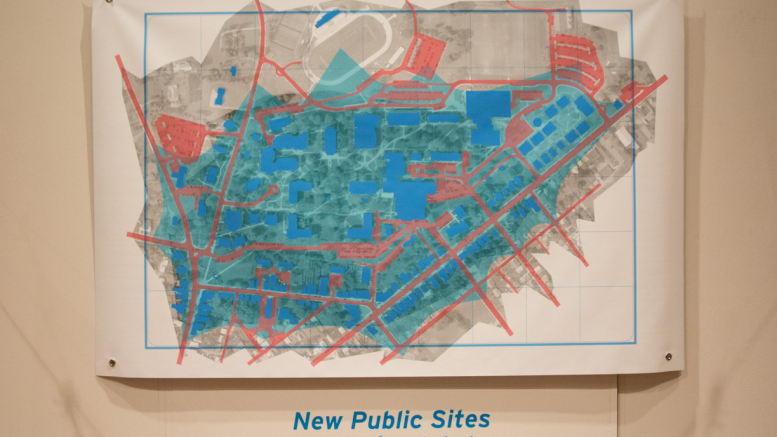 Coreil-Allen created a map of McDaniel that highlights the various public spaces on campus. Photo by Kyle Parks.

On Nov. 5, McDaniel’s Rice Gallery unveiled its most recent exhibition: “Alternative Cartographies: Artists Claiming Public Space.” This exhibition explores the idea of space and map-making in a variety of ways: international barriers, ‘hidden’ public space, and transferring language to space. 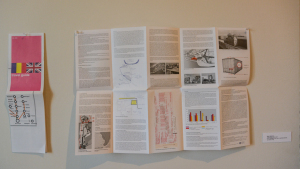 In Bejenaru’s work, a brochure tells how to relocate from Romania to England. Photo by Kyle Parks.

The first major theme of the exhibition has to do with international barriers. This is first seen in Bejenaru’s Travel Guide. In this work, which takes the form of a formal travel brochure, detailed instructions are given to the audience on how to travel from Romania to England. A Romania native, Bejenaru highlights the abuses of EU nations to eastern European and African immigrants upon border tightening in the early 2000s. This work is extremely relevant on today’s world, with many Syrian refugees going through great struggles while attempting to immigrate to EU nations. 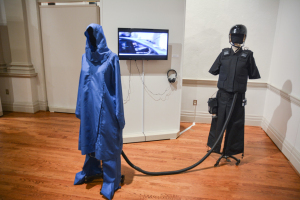 The suits used in Robinson and Kostova’s work. Photo by Kyle Parks.

The idea of international barriers is also pondered in Daniela Kostova and Olivia Robinson’s Negotiations. This project utilized two costumes: a blue suit with a camera and a dark, authoritarian-looking suit, both connected by a cable. According to the artists, the blue outfit symbolizes an “alien” figure while the other symbolizes authority.

This has a dual meaning. On one side, it demonstrates the idea of a person being an “alien” in a society. This, in a way, reflects Kostova’s dual-life between her native Bulgaria and the U.S. However, the other aspect of this work is the idea of needing surveillance to keep members of society safe. Using bluescreen technology, the video recorded by the blue suit overlays video taken by the wearer of the black suit, symbolizing the difference in perspective. 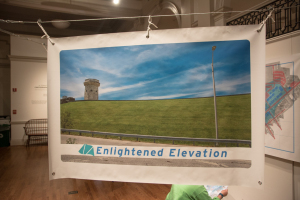 The concept of public space going unrecognized or unused is also explored in “Alternative Cartographies.” Coreil-Allen’s works are based on the idea that there are countless public spaces for people to enjoy that go unused. In his work, he helps citizens become “radical pedestrians” through walking tours in given areas. Members then ‘reclaim’ spaces by physically entering and naming them. He creates new maps of areas that outline these new public spaces and hopes they can become new spots for recreation.

The occupation of public space is also a theme in Daniela Kostova and Maryana Todorova’s Monuments of Incomplete Transition. Both native to Bulgaria, Kostova and Todorova were inspired by the many makeshift shack-businesses that blanketed the streets of Sofia, Bulgaria after the fall of communism and the shift to a market economy. 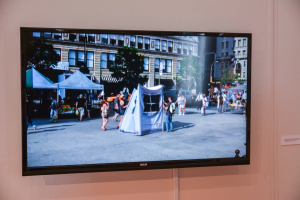 Todorova and Kostova utilized the asistance of strangers to hold and move their vinyl structure. Photo by Kyle Parks.

In their project, the two created vinyl structures that required the assistance of strangers on the street to support and move. They undertook this in Sofia and New York City and, by using the help of people on the street, created temporary social spaces out of public spaces.

A final theme of the exhibition is the transformation of language to space. This was done in artist Jason Hoylman’s The Grafting of Language to Space. The assistance of McDaniel students, faculty, and staff was utilized in this work: for four weeks, they kept detailed journals of their daily routines, from which Hoylman selected words and transformed into numbers. He then, using a mathematical language, created shapes with the Lo Shu Square. 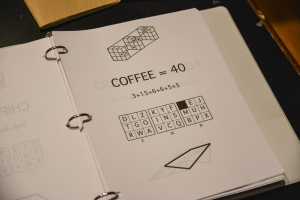 Part of the inspiration for this project comes from pictographs, cuneiform, and progressively more abstract writing systems as human history unfolded. Another aspect of this is the connection between humans and a cosmic order, but also the idea that cartography itself results in the elimination in many elements of ideas and how absurd the practice can be.

Alternative Cartographies will be on exhibit until Dec. 18. Feel free to visit it in person and ponder the idea of map making and its many implications for yourself.

Notions of Place: A Photo Essay

From the Archives: Buildings of McDaniel’s past and present