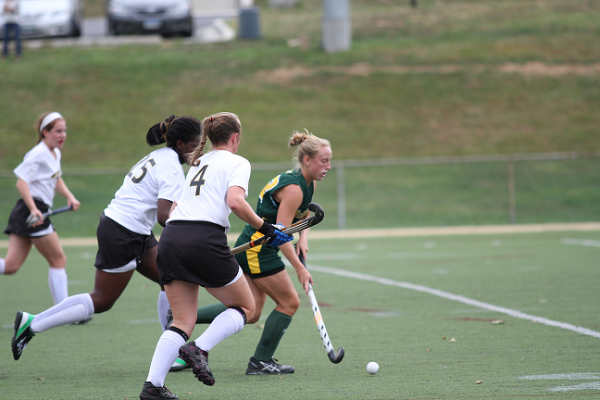 On Saturday, Sept. 21, the McDaniel Green Terror field hockey team hosted Bryn Mawr College. The record of the Green Terror squad was (2-3) with an (0-1) Centennial Conference record. This was an important game for McDaniel field hockey, trying to capture their first conference win of the season. The first half of the game was dominated by McDaniel, scoring three goals compared to Bryn Mawr’s only goal of the game, which was scored by junior Madison Beckman, assisted by sophomore Kayla Bixler. For the Green Terror, sophomore Lara Haab had an explosive first half, contributing to all three points scored in the half. Haab had assists from teammates Sara Reynolds, Sarah Bach, and Bayley Vohs.

The second half of the game was in the hands of McDaniel as the team scored two more goals and kept the defense strong against Bryn Mawr. Goals were scored by sophomore Lara Haab assisted by freshman Sara Reynolds, and by sophomore Erica DeColli, assisted by freshman Julie Little. The total number of shots taken by the Green Terror offense was 25, with 12 shots in the first half and 13 in the second half. Green cards were given to McDaniel freshman Devon Denman and freshman Maya Pickens, both in the second half of the game. McDaniel would go on to win by a score of five to one.

After the game, head coach Melissa Miranda Jones said, “We needed the win.” This was very true with no previous conference win yet this season. With next week’s home game against Ursinus College (2-0), Coach Jones stated that there is “more to improve on” to prepare for the game. Coach Jones noted that with the high-pressured position that Sara Reynolds has, “leadership is dependable for specific scenarios.”  She believes that Reynolds’ effort is what made the win possible.  Coach Jones concluded by saying it was “overall a solid win.”