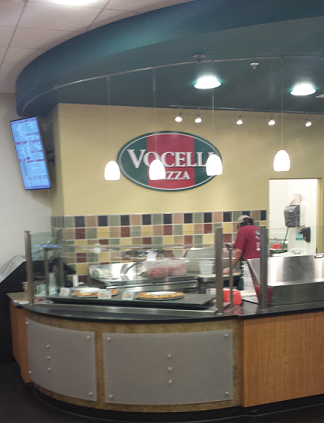 Vocelli Pizza’s new location in Klitzberg Pavilion opened on Thursday Sept. 12. The grand opening featured free slices of pizza, sandwiches and cookies. The grand opening at nine o’clock attracted a large amount of students; however, many have questions about McDaniel’s newest addition.

Though students are very excited for the new food option, some feel as though they know very little about the new Vocelli Pizza and feel that they were ill-informed.

Junior David Motok, though he loves the new food option on campus, felt that the opening was kind of sudden and unannounced.

“I love the Vocelli’s on campus; finally, we have somewhere new to go for food,” he said. “But it seems like it was not broadcasted across campus. The first notification I saw about Vocelli’s was the menus that were placed on everyone’s doorknobs in Blanche only a few days before its opening.”

Dean Gerl helped broker the deal for the new Vocelli restaurant. “The announcement wasn’t delayed,” she said. “It was announced in a number of different venues. The publicity ‘blitz’ went live five days prior to the opening.”

The opening of Vocelli Pizza means another food option on campus, but does it also mean another job opportunity for students?

“Students are welcome to work at Vocelli’s,” said Gerl. “It is a separate company, so students need to talk with Vocelli staff regarding possible employment opportunities.”

Still, some students wish to see other businesses on campus, to expand McDaniel’s food options even further.

“I love the new Vocelli restaurant,” junior Travis Hale said. “It is a great resolution for the less than satisfactory options here at McDaniel, but I would love to see a Chick-fil-A or even a Subway on campus in the future.”

Junior Connor Firor shared some of the same thoughts, saying, “I personally would love to see a Wawa come to campus. Not the gas station part, obviously, but the inside where they have hot subs and other foods to offer.”

According to Dean Gerl, McDaniel has sought other businesses to come to campus but has failed for specific reasons.

“Other businesses have been approached in the past, but due to the low volume of the traffic, estimated amount of sales would not have been profitable for them.”

Dean Gerl stated that Sodexo and Vocelli Pizza have a certain agreement which allowed them to come to McDaniel.

“Sodexo and Vocelli’s Pizza have established very successful partnerships at other campuses like McDaniel College, including Loyola College and Mary Washington University.”

The new Vocelli Pizza will be accepting McDaniel One Cards but it is not part of the student meal plan.

“It is typical that franchises or outside vendors cannot accept meal exchanges. All of our other venues are directly operated by Sodexo/McDaniel College,” said Dean Gerl.

The new Vocelli Pizza has drawn a lot of attention for itself and clearly students want other food options to follow in the steps of the restaurant.