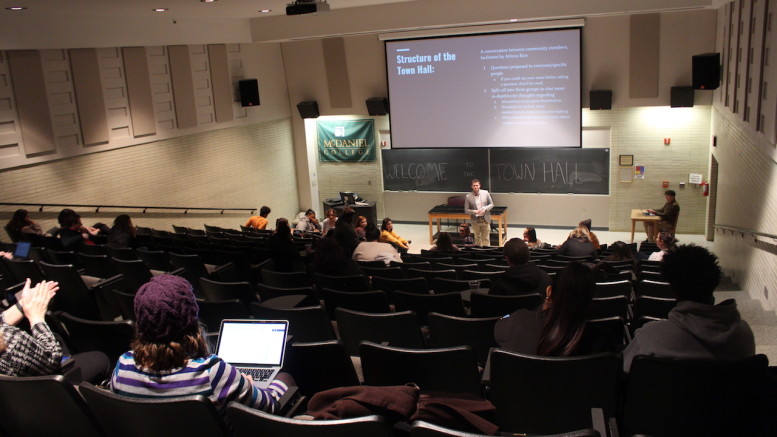 On Wednesday, March 6, McDaniel’s Progressive Student Union and SGA held a town hall meeting in Decker Auditorium to discuss the recently-announced academic changes, which include the suspension of the art history, religious studies, French, German, and music majors, as well as minors in music and German, and the deaf studies graduate program.

About 30 audience members were present, including students, staff, and administrators. President Casey and Provost Jasken did not attend, as they received the invitation with too short of a notice, according to PSU. The discussion was moderated by senior Atticus Rice.

The town hall began with a presentation by PSU members senior Monica McInerney and sophomore Khalil Edwards. Their aim was to explain the process and results of the academic restructuring and to offer PSU’s comments on the changes.

Edwards said he thought emails that Casey and other College administrators sent to the student body throughout the fall and early spring — which included surveys for gathering student input on current and potential future academic programs, as well as an introduction to the restructuring in September and an update in January — did not provide enough detail about the process.

“The emails felt a little bit brief,” he said. “They didn’t get into the mechanisms behind why these decisions [regarding the need for academic changes] were made.” Edwards and McInerney also criticized what they said was the lack of a clear time frame in these emails that outlined the restructuring process.

Casey sent an email to the McDaniel community providing a link to a timeline of the process on Feb. 28 after the Board of Trustees voted to suspend the programs on Feb. 23.

The speakers also expressed their concerns about losing classes that address African studies that are offered by the affected departments, as well as about the loss of minority faculty in those departments.

McInerney and Edwards concluded with talk about future actions they believe the College should take regarding academic changes — such as avoiding following popular higher education trends in order to sidestep market saturation — as well as other measures it could have taken instead of suspending certain majors and minors.

“We realize the decision has been made, but it’s important to talk about other decisions that could have been made,” said Edwards.

This opened the discussion with audience members. One recurring topic was the perceived lack of transparency from the College about its academic restructuring process.

PSU President SG said she had wanted the College to provide students with more information about what was going on during the departmental evaluations. This was a factor in launching PSU’s calls for testimonies about the threatened programs on the organization’s Facebook page, as well as its protest at the Feb. 23 Board of Trustees meeting.

“I don’t know what the alternative routes to participate [in the process] are,” she said. “We made those routes out of necessity.”

Audience members asked about student participation during the Board of Trustees meetings as well. Two to three students, who typically remain anonymous to the rest of the student body, are invited to the Board’s meetings on a yearly basis.

Student audience members also brought forward their concerns about faculty in the affected departments: some wondered if there is still incentive for faculty to remain at the College and what would happen if professors left before their programs were phased out.

Janelle Holmboe, vice president of enrollment management, said that while she cannot speak for her colleagues, she does not anticipate faculty leaving. She cited the admiration and compassion students have for their professors as one of the reasons.

“We feel the same way about our students; we want to bring that energy,” she said. Holmboe also said it is unlikely the College would not be able to find a professor to teach out the program if a faculty member did choose to leave.

PSU, SGA, and audience members dedicated a notable part of the town hall to the College’s music program as well.

“It’s not the same to have ensembles as it is to teach music as a discipline,” said G, referring to the retention of activities like choir but the suspension of all music classes.

Music professor Margaret Boudreaux said the elimination of music classes was unexpected across the department, and that only having ensembles leaves nothing in the way of music for McDaniel students who do not already have instrumental or vocal experience. She also referenced the common idea that the arts are for the rich, as private musical lessons are an expense not many can afford.

“I don’t want that to be the case at McDaniel,” she said.

Members of the audience were also worried about the future of the liberal arts at McDaniel. Several students asked how the College could remain a liberal arts school without the programs that are being suspended.

Associate Dean of Sophomore Students and Professor of Psychology Stephanie Madsen said the core of McDaniel’s liberal arts program is in its general education requirements.

“Our liberal arts are our general education plan. Every college does it differently. We are not losing in most places, besides German and Latin, the ability to take classes in those areas,” she said. “That kind of synergy you get is still here.”

Members of PSU, SGA, and the College’s administration showed interest in the potential for more collaborative town hall meetings.

“How we work together to think about how to invest these dollars is really interesting,” said Holmboe.

At the conclusion of the town hall, PSU invited audience members on their way out to write on posters they had hung on the wall. These had prompts that included “incorporating greater transparency,” “alternatives,” and “other questions/concerns.”

The student organization shared responses on their Facebook page later that evening.

Free Press Co-Editor-in-Chief Atticus Rice moderated PSU and SGA’s town hall meeting on March 6. He was not involved in the editorial process of this article.

McDaniel welcomes students back for the fall 2020 semester with restrictions