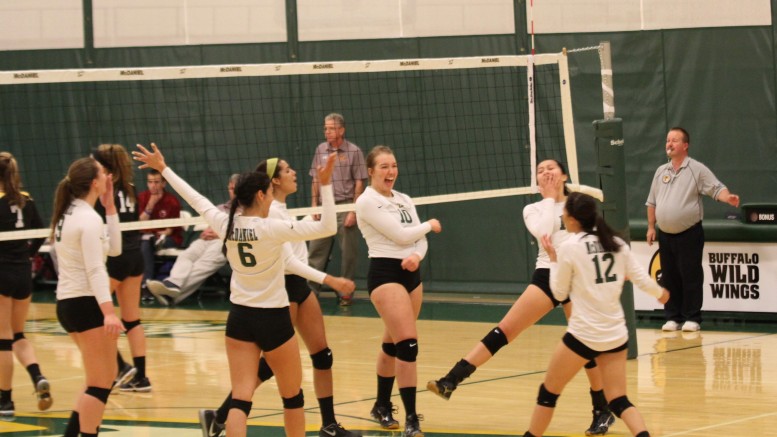 The Green Terror celebrate a point during their 3-0 sweep of Ursinus on Saturday. Photo by Atticus Rice.

Green Terror Volleyball extended their win streak to five on Saturday with shutout wins over the Ursinus Bears and Randolph Wildcats in tri-match action at the Gill Center.

McDaniel was led by Patricia Davie who collected 17 kills between the two matches. Teammate Alexis Duday added 15 of her own to help the team to their swift set wins.

On the defensive end, senior Genna Weger led McDaniel with 31 digs on the day.

The Terror (10-9, 2-1) started off the first match against Ursinus with a 15-9 lead following a back and forth struggle between the two opponents. A 7-0 run with Abigail Hernandez on the serve put McDaniel up 22-10, sealing the first set for the hosts. McDaniel would close out the first set with a 25-13 win.

The final set of McDaniel’s first match would be in their favor for the entirety of game play, allowing the Terror to drop Ursinus by a 25-12 margin.

The sweep was the fourth of the season for McDaniel, providing a foreshadow for the day’s next match.

The Randolph Wildcats (2-14) showed no bite, allowing the Terror to run away with their second sweep of the day to extend their winning ways to five games.

Starting 40 minutes later than scheduled due to the extended game between Ursinus and Randolph, the final match of the day was the least contented of the three. McDaniel won the first set by a score of 25-11, allowing no room for error by the Wildcats.

The Wildcats saw strong play from Autumn Troxell who accumulated 28 kills on the day, 22 of which came against the Bears in the two visitors’ match.

The Bears outlasted Randolph in that middle match, taking it by a set score of 3-2.

McDaniel Head Coach Jessica Wolverton spoke to her team’s flexibility following the day’s tri-match sweep, noting that they played a number of people that they usually don’t. “We have a really strong lineup,” Wolverton noted, referencing the fact that her team swept the day despite starter and captain Taylor Bauman being sidelined with an injury on Saturday.