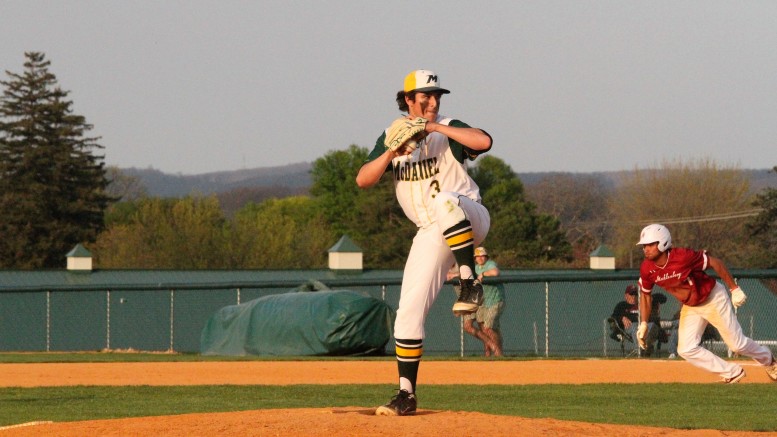 Green Terror baseball defeated the Muhlenberg Mules 11-10 and 4-2 in what would be their first doubleheader sweep of the season on Saturday at Preston Field.

McDaniel (11-16, 3-7 CC) took to the field having lost eight of their last nine games with only five wins total since their return from spring break ball in Florida.

“This was a huge sweep for us,” said head coach Dave Seibert. “It’s a long day,” he added with a laugh.

Nick Valori led the Terror in the first game of the day. The senior knocked in three runs on four hits in five at bats while scoring three of his own.

Muhlenberg (13-15, 3-7 CC) struck in the top of the first when Chris Grillo scored on a Robbie Hopes up-the-middle single.

The Terror responded in the bottom of the inning with hits from Eric Grantland and Brad Thaxton. Grantland’s single sent Valori across the plate. Grantland and Anotnio Rosanove then followed with a double steal of second and home to give McDaniel the edge 2-1. Grantland would come around on the Thaxton double to give the hosts a 3-1 lead by the end of the first.

Valori doubled and homered in the second and fourth, pushing a total of three runs across the plate in the two innings.

The two Centennial Conference opponents battled back and forth with the Mules holding a 10-9 lead going into the last of the ninth. Tyler O’Shea’s walkoff single scored Keegan Romanoff and Logan Seitz to secure the Terror their second win this month.

Seizing the walkoff energy from the first game, the Terror scored four times over the first three innings, holding the Mules to just two runs which came in the top of the fifth.

Grantland paced the field, placing two hits in four at bats with one run scored.

McDaniel’s first run came off a wild pitch from the Mules’ Austin Disher (L, 0-2) with Rosanova on third.

A Will Strauss sacrifice RBI brought around Kaleb Reitz in the second to put the Terror up 2-0.

McDaniel then doubled their lead in the third when Grantland scored on a Muhlenberg error off a ball hit to short by Tom Daly and Kasey Nelson came around on a second Strauss sacrifice.

The second-game pitching staff held their composure over nine solid innings, striking out eight and allowing just two runs. Thaxton (W, 3-3) got the start, lasting five and a third. Austin Fry and Nathan Miller moved the team through the eighth before Zach Fortuna (SV, 1) came in for the save.

“[Just] trying to get back on it, Fortuna said following his outing. “[We were] looking to get ahead, get a streak together.”

The day’s two wins keep the Terror tied for eighth in the Centennial Conference standings with Muhlenberg and Washington (Md.).

“We’re really focused on one game at a time,” Seibert said of the upcoming schedule and the day’s success. “We’re really just trying to get one at a time right now, get back on track again.”