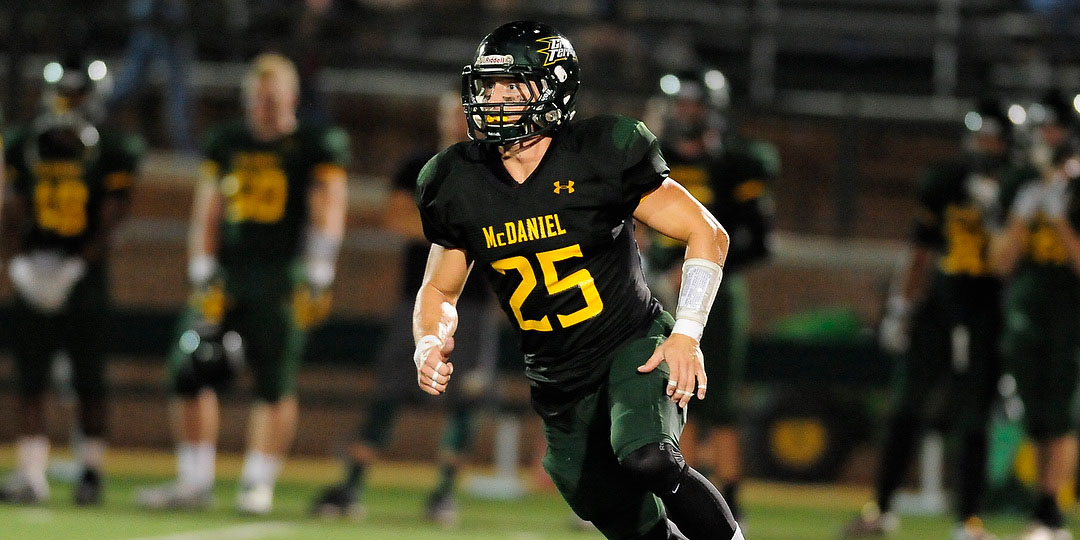 Senior Garret Diehl on the field for the first time as a Green Terror. Source: mcdanielathletics.com

McDaniel hosted Catholic in a nail-biting home opener on Saturday, Sept. 5. With only 14 seconds left in the fourth quarter, Catholic’s Lucas Morley caught a touchdown, making the final score 34-33.

McDaniel was first to put points on the board when Spencer Wiersberg kicked a 27-yard field goal.

Freshman Matt Cathey made his first touchdown as a Green Terror shortly after the second quarter began.

In the last five minutes of the first half, Wiersberg completed another field goal. John Chamberlin scored a touchdown off of Matty Callahan’s 58-yard pass, and Mike Casper put another three points on the board for his 42-yard field goal.

The score remained the same until 57 seconds before the fourth quarter. Morley received an 18 yard pass from Catholic quarterback T.J. Tutone, making the score at 14-23.

Another touchdown and successful extra point from Marty Windisch and Wiersberg occurred two minutes into the fourth.

Catholic began to make the deficit smaller by Morley’s three touchdowns in the last five minutes; the last touchdown created a one point advantage over the Green Terror with only 14 seconds left on the clock.

“It’s never easy to lose, but to lose like that is pretty tough, said linebacker and captain Matt Quattrone.

Despite the loss, Coach Hoyt assured that his team “gave outstanding effort” and “will get back to work this week.”

Senior Garrett Diehl played his first game as a Green Terror on Saturday and led the defense with 13 tackles and an interception. He believed the team “had a good tempo all game.”

The opening of the Centennial Conference schedule will occur on Saturday, Sept. 12 at 1 p.m. with a home game against Moravian.