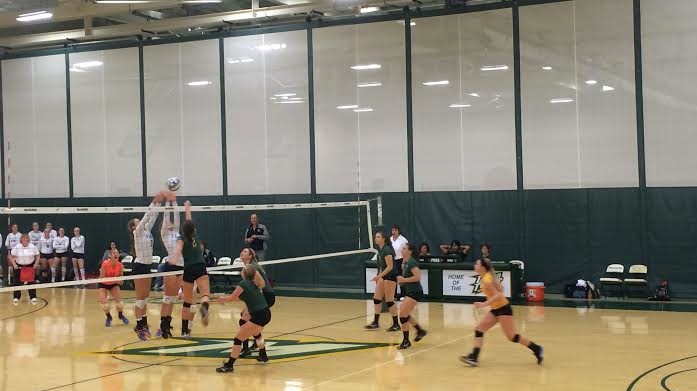 The team started strong in September, going 7-1 in their first eight games. Three consecutive losses after opening conference play mid-month led a 9-5 record by the start of October.

Consistent winning play for nearly all of October, including wins against the top three teams, earned the Terror a spot in the Centennial Conference playoffs where they won out, beating Franklin and Marshall 3-1, Johns Hopkins 3-2, and Haverford 3-2 to take the Conference title.

The Terror would lose their final game of the season to Heidelberg, a shutout, in playoff tournament action.

On the defensive end, first-year Taylor Bauman led the team with 441 digs, followed by 280 from Martin and 265 from junior Genna Weger.

The Green Terror have 10 matches under their belt this season, posting a 4-6 record, all non-conference.

The Women started play at the Battlefield Classic, hosted by Gettysburg, the first weekend in September, dropping three of their four matches. A home shutout loss against Catholic later that week left the Terror shutout in three of their first five matches.

The Sea Gull Classic, hosted by Salisbury, proved more fruitful for McDaniel as they won three of their four matches.

While they were handed their fourth shutout of the season at Stevenson on Tuesday, the Terror return home for their final preseason game on Thursday against Hood at 7:00 p.m.

With support from last year’s returning stars, this season’s fresh faces, and team captains Taylor Bauman, Lexi Corral, and Maddie Moyer, McDaniel volleyball will look to extend their reign over the Centennial Conference Saturday against Muhlenberg.

The 12:00 p.m. match will be followed by non-Conference action against Kean, hosted by the Mules.

The Green Terror will face rivals Swarthmore, Haverford, and Johns Hopkins all in October, all of which should prove worthy opponents for one another, and make for great matches come late season.