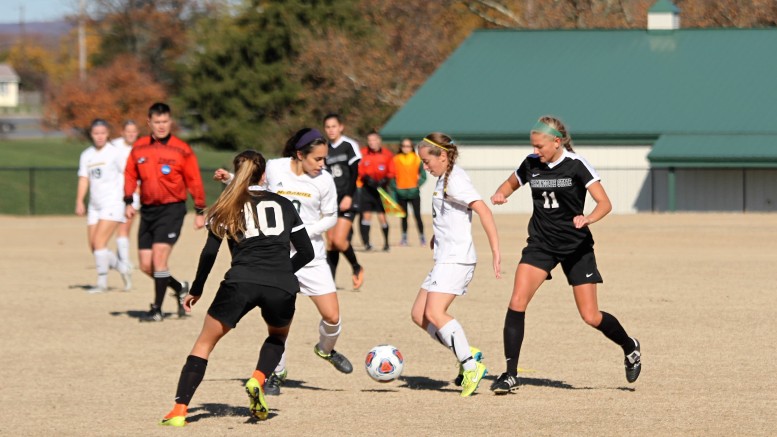 Paola Rosa (left) and Katie Kirschenmann (right) fight for the ball in their home whites during the first round of the NCAA Tournament.

McDaniel Women’s Soccer cruised to a 4-1 victory over Farmingdale State on Saturday, advancing to the second round of the NCAA Division III Tournament. Hosting the weekend-long Westminster Regional, the Green Terror earned their key win just three days after seven of their players were awarded All-Centennial Conference honors.

The Terror (17-2-1) jumped out to an early lead with a shot from Katie Kirschenmann. The junior’s team-leading 11th goal of the season came off her rebound of teammate Rachel Engle’s shot from the right.

Kirschenmann was confident in her team from the start, saying, “Once we got the first goal I knew we would get multiple after that.”

The Rams (11-9-3) scored their lone goal just 87 seconds into the second half, a shot from the right by Amanda Khare, assisted by Alexandria Tudisco.

Despite the strong start by Farmingdale State in the second, McDaniel had the game sealed from the start, controlling the ball on the offensive half for the majority of the game.

Freshman Allie Titus added to the Terror’s lead in the first, rounding off a corner kick from Annie Marshall to make the score 2-0 in favor of the hosts.

Leading 2-1 in the 60th minute, McDaniel scored again, their first of the half, to regain their two goal lead. Junior Abby Keen launched a free kick from outside the box which soared over the heads of the players in front of the goal and through Rams goalie Daniella Ford.

Smiling, Keen said she was happy with her goal, but that it “wasn’t exactly how I planned it,” eluding to the fact that she was most likely instructed to loft it into the box for her teammates. Keen added that she thought the ball got through Ford’s hands because of all the commotion in the box.

The final goal of the game came just six minutes following Keen’s, giving McDaniel the final edge of 4-1 in the 67th minute. Senior Nicole Hill sent a stunning cross in front of the net for sophomore Lindsey Farrell who found the back of the net for her first goal of the season.

Farmingdale State’s chances to score were few and far between, putting up just four shots, two in each half. McDaniel quadrupled their opponent’s numbers, boasting 10 shots in the first and six more in the second.

The hosts also led in corner kicks, sending in four from the sidelines to the Rams’ zero.

Newly awarded All-Centennial Conference goalie Sarah McDonald held the Rams to their lone goal over nearly 77 minutes, saving one of their two shots on goal.

Ford saved five of the Terror’s nine shots on goal over her 90 minutes of play.

One category the Rams were able to lead was fouls, accumulating 11 over both halves to McDaniel’s five. Junior starter Taylor Howard was issued a yellow card in the 25th minute for arguing a foul with referee James Brooks immediately following Kirschenmann’s goal.

Despite the high tally of fouls, Rams Head Coach Chris Roche said that the team changed their formation a little bit in the second half, coming onto the field with a little more offense and a little more pressure.

Following the game, Roche said he was “a little disappointed in the way it ended,” adding that he thought they could have been a little more competitive. “Hats off to McDaniel, they deserved to move on,” were his final words.

Last year was the first since 2007 that the Rams didn’t make it to the NCAA Tournament.

McDaniel Head Coach Sandy Lagana spoke of how proud of her team she was, saying that the goal for this season was to make it back to the NCAA Tournament following their first round loss last season. “I’m really proud of the girls,” Lagana said, “I knew Farmingdale State would be a tough opponent.”

Kirschenmann added her own comments, saying that it was “really exciting” to be able to play at this level.

Keen spoke to the fact that the Terror will turn around and play another match tomorrow. “We prepared for this, we’re all fit enough,” the starter said.

McDaniel played back-to-back weekend games just one week ago when they hosted the Centennial Conference Tournament.

With their first round win, McDaniel advances to the second round on Sunday to face off against the winner of the Connecticut College and Scranton game which takes place at 1:30 p.m. Game time for Sunday is set for 1:00 p.m. at the Green Terror Soccer Complex for the final game of the Westminster Regional.