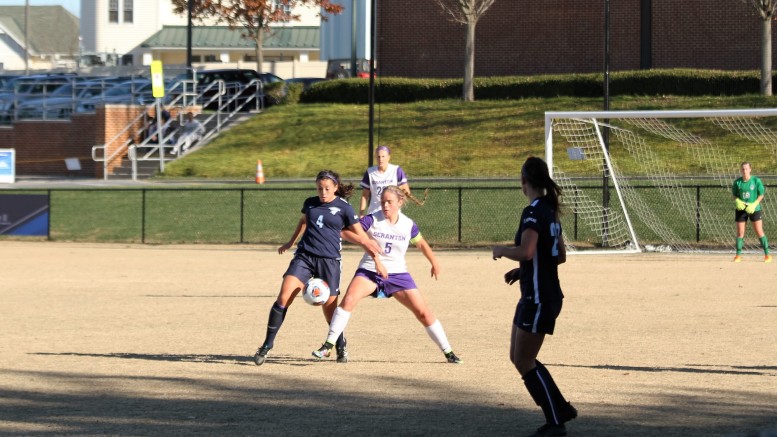 Zoë Stublarec looks to turn the ball for Connecticut College in their win over the Royals at the Westminster Regional.

After over three hours following the conclusion of the McDaniel-Farmington State match, the Connecticut College Camels and Scranton Royals faced off at the Green Terror Soccer Complex in the first round of the NCAA Tournament. Connecticut advanced to the second round on penalty kicks after the game ended in a 1-1 draw in double overtime.

The Camels (10-5-2) drew first off of the foot of Mackenzie Kingston who found the back of the net in the 22nd minute. The junior was assisted by Zoe Stublarec for her first goal of the tournament.

Connecticut netted another goal well into the game, but the shot was recalled due to an offsides penalty.

Scranton (17-1-2) trailed for the first 81 minutes, scoring their first goal with just under nine minutes to play in regulation. The shot came unassisted from Kelly Egan from the right side.

Regulation ended with the 1-1 tie which extended through two 10 minute overtime periods.

Three minutes in, Stublarec fired a shot wide for the Camels, their best chance to score in extended play. The Camels outshot the Royals 7-1 in overtime.

Penalty shots ended with three makes for both teams thanks to crafty footwork and excellent saves on both sides.

The following sudden death shootout brought Connecticut’s Alyssa Kogelmann to the box, facing the Royals’ Krissy Welsh in goal. Koglemann soared the shot past a diving Welsh, sealing the victory for the Camels.

“I went up there and said, ‘We deserve this game’ and put it in,” the freshman said when asked about the shot.

The junior said that, “The positivity from all my teammates” kept her going, that she had it going through her head, when in goal during the tense shootout. “It was just fun and crazy,” she added.

Fouls were nearly even, with six for the Camels and five for the Royals. No cautions or ejections were issued.

Egan and Taylor Stevens led the field for the Royals with three shots apiece.

Scranton Head Coach Colleen Pivirotto said that she knew it would be tight when the game went down to sudden death penalty kicks, saying that, “We thought we had a couple of chances we could have put away,” looking back on the game.

“[We] obviously had a great season, 17-1-1 coming in,” Pivirotto added. “We knew Connecticut College was going to be a great test.”

With the first round win, Connecticut College will advance to Sunday’s second round game to take on hosting McDaniel College.

“We’re just happy to advance,” said Camels Head Coach Norm Riker, in his sixth season with the program, “[It] could have gone either way once they tied it up.”

“I thought we played a great game. Honestly might be the best game we played all year,” the coach continued.

The winner of the second round game will advance to the next round on Nov. 19 to play the winner of Sunday’s game between The College of New Jersey and Brandeis University.