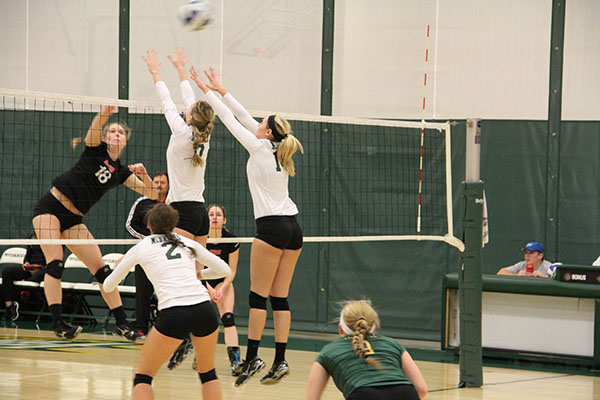 On Wednesday, November 13 the McDaniel (19-13, 3-7 in CC) women’s volleyball team hosted a rematch against the Catholic University of America’s Cardinals (22-14, 1-6 in the Landmark Conference). This was a high-stakes game, as the Cardinals had defeated McDaniel earlier this season in five tight sets, and the winner of ECAC rematch would move on to the next round of playoffs. In the end, the Green Terror women came out on top in a close four set match.

McDaniel came out confident in the first set, with combinations of big swings and scrappy floor play that led to their easy 25-17 set win. The second set looked as though it would play out the same way, with the Terror delivering a debilitating block to the Cardinals offense. However, the set quickly turned into a back and forth, point for point duel. The home team seemed to run into a little trouble covering certain angles of hits from the Cardinal side. They pulled it together enough to deploy a long string of impressive blocks that would completely shut down CUA’s offense, although CUA snuck in a two-point lead to win the second match at 25-23.

Starting the third set, McDaniel jumped to a 6-1 lead over the Cardinals following a trio of hits from Colorado native and co-captain Kloe Martin. It mimicked the opening set, with the Green Terror swinging and hitting the floor hard for scrappy play, and they pulled out a 25-15 set win.

Set number four was a mixture of hot and cold streaks for both teams. They went back and forth with hitting streaks (being delivered on McDaniel’s side from the likes of Reagan Folaron and Lexi Corral), service errors, great digs, and incomplete passes. It seemed to be anyone’s game. McDaniel held the lead at 18-11 when CUA called their first time out. After a few exchanged points, two big kills and a missed serve landed the score at 24-13 McDaniel. After a scrappy play, the Cardinals won a point, but it was Martin again that cinched the win with a kill to end it at 25-14.

The Green Terror will advance to play at Carnegie Mellon University on Saturday for a tournament. Martin ended the night on an even more positive note, saying, “I think that went much better. Serve-receive was much better. I’m just happy we got a win at the end.” She says the key to Saturday is for the team to come in expecting not to win. “We need to come in expecting to work hard to win all our points.”

The NCAA Tournament So Far and the Number One Seeds