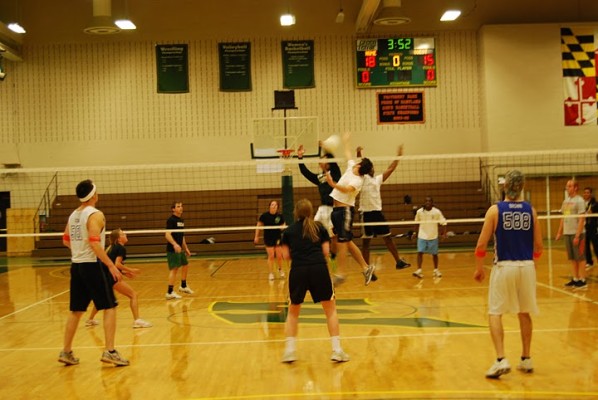 Students participate in one of the many Nothin But Nets volleyball games. Photo by Chris Bolesta. Head to Pictures Speak Louder to see more pictures from the event.

Students participate in one of the many Nothin But Nets volleyball games. Photo by Chris Bolesta. Head to Pictures Speak Louder to see more pictures from the event.

Waking up at 5 a.m. to run during the off season, lifting weights 5 times a week, and trying to stick to a healthy diet. That is the training regime sophomore midfielder Paul Jaworski follows to prepare himself for soccer season.

His training paid off for this night of charity and basketball, when he participated in the Basketball/Volleyball charity tournament co- sponsored by Phi Delta Theta and The Zimbabwe Jan Term team. The tournament was played in Gill Gymnasium with proceeds going towards Nothing but Nets, a charity that helps fight against malaria.

The tournament began with a 10 minute presentation on the meaning of the event. It was given by Kwei Parek and Marisa Hrbal, who had actually gone to Zimbabwe and helped hand out nets. The nets in question are not basketball nets, but rather bed nets treated with insecticides that will prevent mosquitoes from biting sleeping children.

Malaria is a leading cause of death for children, particularly in Africa. It is interesting to note that the organization was started after Rick Reilly wrote about malaria in a column published in Sports Illustrated. Readers responded with donations and Nothing but Nets
was born.

Senior Nick Bender, a member of Phi Delta Theta, found out that Charlie Moore, The Mad Fisherman of ESPN, is involved in Zimbabwe. “He is like a celebrity over there, ” Bender said. “When the Zimbabwe Jan Term team went over, apparently the locals in different villages would talk about him and how he donates a substantial amount of money. When we found out that he was such an advocate for Nothing but Nets we invited him, but unfortunately he couldn’t make it.”

Bender, who helped organize the whole event, thought it went well. “While we were hoping for a few more people, it was still a solid turn out,” Bender said. “We had a great presentation that really explained the cause, we ended up making enough money for 18 and a half nets and the level of competition we had this year in basketball was fantastic.”

The basketball tournament (10 teams playing 3 vs. 3) was the substantially better attended of the two tournaments. Part of the reason may have been the number of athletes from McDaniel sports teams that showed up. Five basketball players, each on different teams, a bunch of teams made up of football players, a couple golfers, some soccer players and some lacrosse players showed up to compete. Most of the participants were playing for fun, but for the most part they all had some basketball skills. That brought an enjoyable edge of competition to the event.

Sophomore midfield lacrosse Mario Davis played with a couple of teammates and had a great time. “I don’t really play basketball. I had fun. There were some really good players out there,” Davis said.

The team that ended up winning was the team with the leading scorer from the basketball team, senior Devan Lesniak. Senior Josh Lebrun and senior Brett Callegary were his teammates. In front of a mostly empty gym, they took part in a crazy triple-overtime game against sophomores Tim Mclister, Shane Edmund, Ryan Procaccini and sophomore basketball player Christopher Cowles. “I’m glad we won,” said Lebrun. “After playing till near twelve o’clock, I’m glad we won the game. It was all for a good cause, but a good cause and winning a t-shirt is always good.”

Freshman Joe Klepper, who along with freshman Cody Shives, freshman Alec Weaver and Jaworski made a rather surprising run to the final four, summed up the night: “I got to play a lot of basketball while supporting a good cause,” said Klepper. “So now I don’t feel guilty that I have been in the gym from 8 to 11 not doing my homework.”

Why Kentucky Will Be The 2012 NCAA Basketball Champions

1 Comment on "Charity Basketball and Volleyball Tournaments Draw a Crowd"