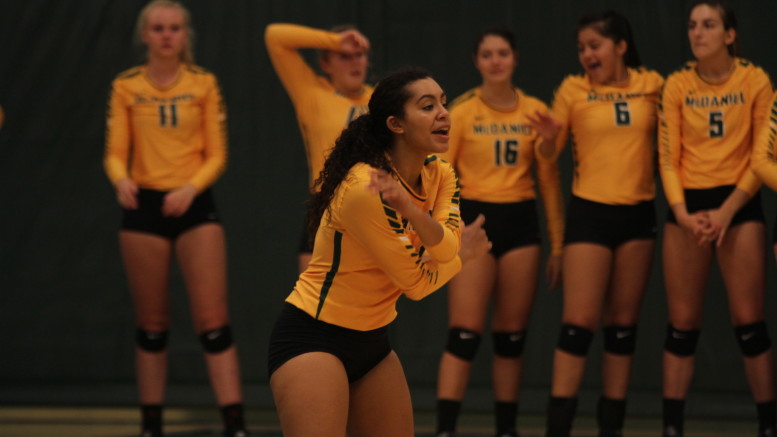 McDaniel volleyball fell short in a three-set sweep to the Bethany (W.V.) at the Gill Center in what would be the final match of the season Wednesday night.

The face-off between the Green Terror (19-9) and the Bison (23-12) was a first round match in the ECAC tournament which McDaniel received a bid to Monday after their conference semifinal loss at Johns Hopkins.

The Bethany win sends the Bison to Frostburg for the next round of the ECAC tournament.

Despite losses in the final matches of the season, the Green Terror continued to focus on improvement and their fan base was behind them bringing a significant crowd to Wednesday’s match.

“Having a home game and having our fans, friends and family come out to support made a good environment for a playoff game,”  captain Taylor Bauman said.

The atmosphere created led to Gayle Edelstein dishing 16 assists and Marlowe Embry smashing seven kills in addition to getting on the floor with 17 digs. Bauman followed suit, racking up 19 digs.

On the Bethany side of the net, Jenna Scott,  Sumayyah Muhammad, and Lindsey Llewellyn combined to form a triple threat with Scott lobing 22 assists for Llewellyn and Muhammad to capitalize with a combined 17 kills.

Top play from both Embry and Bauman led to their Centennial Conference second-team recognition this season. En route to the acknowledgement, Bauman broke McDaniel’s record for digs in a  regular season with 561. Off the floor and continuing to dominate in the air, Embry whipped 234 regular season kills.

Strong play from McDaniel this season resulted in the Green Terror being the only team to move up in Centennial Conference ranking from their originally selected ranking.

“There is no where else to go, but up for this team,” team manager and Embry’s cousin Allegra Berry said. “I expect nothing but great things from them next year.”

McDaniel’s ECAC bid comes two years after their 2015 conference championship season, the last season the team made the postseason.