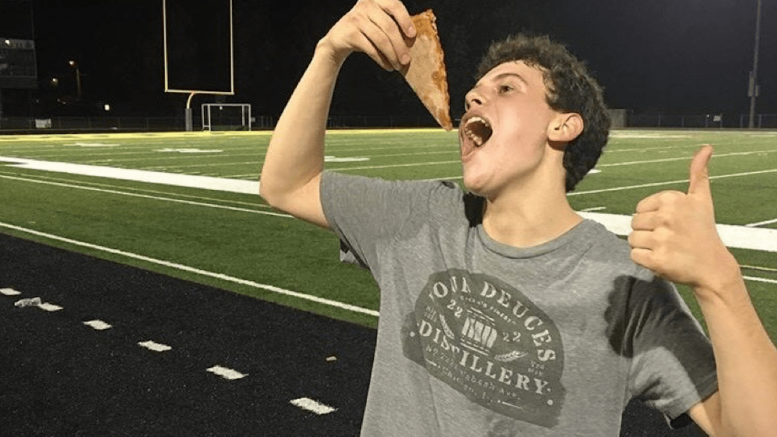 For most students, this is the time to cozy up in their dorms, either to do homework or to watch a few episodes of a show on Netflix before going to sleep.

For some, however, this penultimate peal summons them to the stadium for a night of Ultimate Frisbee.

In the past couple of years, McDaniel College’s Green Terror Ultimate has grown significantly.

A student organization on campus, the club is open to all who want to play.

There are no requirements for students to join – as the organization isn’t an official college sport – presenting a unique niche for students looking to exercise while having fun, and still have the competitive edge of a college-level sport.

Sam Ahern, the current president of Green Terror Ultimate, runs the practices twice a week, and occasionally organizes matches against other schools.

“To keep things interesting, we play for pizza during practices,” said Ahern, as he tossed a Frisbee to another student. “When you involve food in a match, things get surprisingly competitive.”

Ahern, a sophomore, joined as a first-year, both for the love of the sport, and for the chance to help the organization grow.

Now, as president, Ahern plans to continue the bi-weekly practices, and hopes to increase the number of organized matches against other colleges.

“There’s a great group of people that come out to each practice, and the games are even more fun,” said Ahern. “Yes, we’re technically the McDaniel College Ultimate Frisbee Club, but the more I play, and the more we play together, the more I feel like we’re becoming a family, too.”

There have been as many as 30 people – both students and faculty – that have attended a single practice, and Ahern hopes to see that number continue to grow.

Daniel Smith, a senior, has attended nearly every practice after joining last year.

“After the first practice, I immediately knew I was going to have a lot of fun with this club,” Smith said.

Smith also mentioned that he played school sports in high school, but wanted to focus more on academics in college.

“Green Terror Ultimate is perfect for me,” Smith said. “It still gives me the competitive feeling of playing a sport, but without the insane time commitment of a school sport.”

Sophomore Lucas Craig  played Ultimate in high school, and didn’t want to stop when he came to college.

“The atmosphere is what keeps me coming back,” said Craig, between bites of pizza. “There’s a very supportive group of people on the team, and every time we practice, it really feels like a group of friends getting together to play a game.”

Craig is looking forward to the next two years of Ultimate, and is excited for the plan to increase the amount of competitive games against other schools.

And, in the words of Ahern, “Frisbee, or not Frisbee? That is the question.”