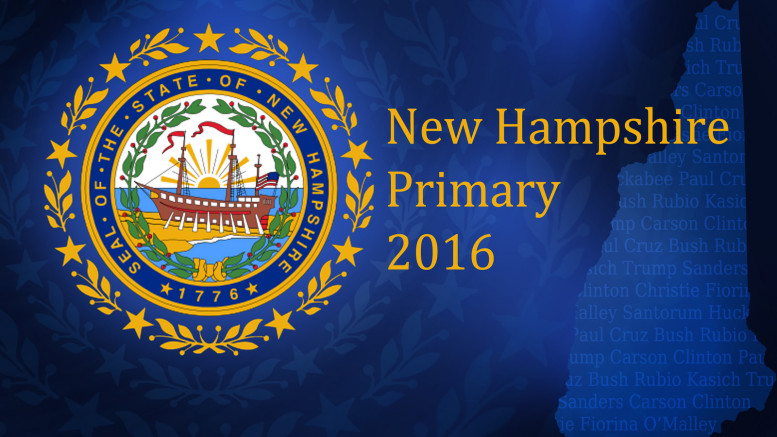 The first in the nation primary in New Hampshire has come and gone, and while lacking the entertaining pizzazz of the Iowa caucus, it still has sent shockwaves through what is shaping up to be a historic election season. Instead of coin tosses and close ties, the state saw and uprising of “anti-establishment” voting and surprise runners up.

On the GOP side, Donald Trump emerged victorious, with a solid 35.4% of the vote, thereby reestablishing his momentum after his second place finish in Iowa. However, more importantly, by winning a primary, Trump has managed to finally go from outer rim heckler to legitimate candidate, and will now be able to force the Republican establishment to either listen up or face the potential of being left behind.

In the establishment melee, things have only gotten more murky and complex, as John Kasich, who has campaigned as the inveterate moderate but has failed to gain traction up until this point, managed to pull a solid 15.7%, enough to put him solidly in second place. Will it hold? Perhaps, but what he has inadvertently done is performed well enough to enter into the Bush-Rubio brawl, both of whom have better countrywide appeal and deeper pockets.

As for Bush and Rubio, the situation has become more and more complex. Bush managed to pull fourth place with 11%, less than a percentage point behind Ted Cruz (whose Iowa win seems to have been a flash in the pan), giving him the opportunity to not only stay in the race further, but to attempt to push his way back into the establishment position.

Rubio, on the other hand, seems to have caught a case of the Dean Screams. “Robot Rubio,” as he is now being called, floundered when in the final debate he repeated twice the same anti-Obama speech, leading to a sharp attack from Christ Christie. Was this the cause of his lackluster performance in the primary? Probably not, but it was likely enough to drop him to fifth place with 10.5%, a significant drop after nearly unseating Trump for second place in Iowa.

On the Democrat side, the results were resounding, which only served to make the future hazier. In short, Bernie Sanders went from a near tie/pseudo-loss in Iowa to a 60.2% victory in New Hampshire, one which, unlike in Iowa, managed to not only include young and far left voters, but also moderates, conservatives, high and low wealth voters and notoriously fickle New Hampshire independents.

Hillary Clinton, on the other hand, won 38.2% of the vote, which, while certainly a solid showing, still constituted a resounding loss (though, arguably, not the apocalyptic one some had predicted). Unlike in Iowa, she managed to carry no individual group, and was even unable to court the same majority of women she was able to pull in the caucus. With campaign reorganization supposedly in the works, Clinton will have to hope that hedging her bets on the minority vote in Nevada and South Carolina works in her favor.

And so what does this mean for the Democrats? Obviously, it further legitimizes the campaign of Sanders; both by showing his across boundaries appeal and by giving him a solid win. However, a few things in New Hampshire worked in his favor.

Firstly, New Hampshire is almost exclusively white, and so Sanders still has yet to be tested under the microscope of minority voters, a microscope he will be forced under in South Carolina and Nevada. Secondly, neighboring state residency, though less important than proposed by the Hillary campaign or many analysts, certainly did not hurt the Vermont senator. And, lastly, the open primary system of New Hampshire may have helped Bernie, given his appeal with registered independents.

So is this the start of the “revolution” that Bernie has spoken of? Only time will tell. Bernie has secured a key state and added momentum to his campaign, but he still has many hurdles to jump before he can make it to the nomination, and will be doing so under heavy fire from both Hillary and, likely, the GOP, who will now hone in on him as he aims to become frontrunner.

The race to Super Tuesday is now on, and it is almost certain to be one full of surprises.