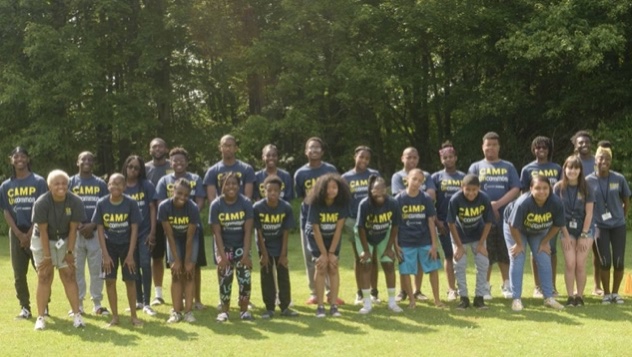 What is your idea of the perfect utopia for kids? Where would you want to see your younger loved ones spend their summer? Regardless of where you choose, your loved ones belong in a place where they are respected, loved, and appreciated. My idea of the perfect utopia for kids is far more than any physical place. A utopia is more of how you feel rather than where you find yourself. That utopia is Camp Uncommon.

Camp Uncommon is a camp that runs over the course of the summer and prioritizes children in elementary and middle school from impoverished neighborhoods. Camp Uncommon serves children from a number of cities such as Boston, Camden, New York, Newark, Rochester, and Troy. Camp gives children the opportunity to venture outside of their neighborhoods and connect with other kids who, in most cases, become lifelong friends. Camp Uncommon first began in the summer of 2016 at Colby College, but has since changed locations to Poyntelle, Pa.

Camp Uncommon is split up into four different sessions to accommodate as many kids as possible. The goal this past summer was to share the experience with over one thousand kids, which is now the largest number of kids they have ever served in camp history. In previous years, they have only had about 500 kids over a span of two weeks, but they believe so strongly in their mission of giving children the best summer ever that they continue to grow each year.

Children who attend Camp Uncommon engage in various activities throughout the course of the summer such as hiking, nature discovery, athletics, arts, and STEM courses. Alongside the various physical activities the kids take part in during their time at camp, they are also immersed in character building activities such as Discovery and Morning/Evening Summit. Discovery takes place every other day during the span of two weeks and focuses on self reflection as well other values of the day such as empathy, gratitude, wisdom, and honesty. Camp Uncommon prioritizes making kids’ summer enjoyable, but also insightful so they can become young leaders the following school year.

Camp Uncommon not only benefits the kids who attend, but also helps employees with their future by building qualities needed for adulthood, college, and teaching. Most employees at Camp Uncommon are teachers themselves, or are getting involved with teaching as a career. Camp Uncommon is under Uncommon Schools so most people find themselves with an opportunity to have a career in teaching after their first or second summer with Camp Uncommon. Aside from this career opportunity, Camp Uncommon also employs high school juniors as junior counselors, which is a good way for them to gain a recommendation for college applications and a paying job for the summer.

In my own experience, Camp Uncommon has strengthened my college application, given me a new perspective on life, and has granted me with life-long connections that I cherish. My coworkers similarly believe Camp Uncommon has made a difference in their lives.

“It’s made me a more responsible and aware person in my professional life,” said Louis Copin. “It’s made me more comfortable in who I am and expressing who I am no matter who is around me.”

“Working at Camp Uncommon has encouraged me to step out of my shell, and network with different people, which ultimately made me trust myself more and give new things a try,” Tyriq Presely added.

Camp Uncommon’s ultimate goal is to provide the best summer for as many kids as possible every year. More information about the camp can be found on their website and Instagram page.