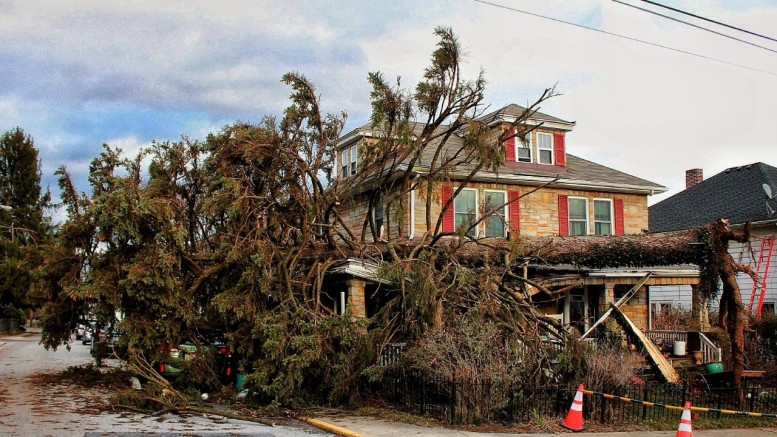 On Feb. 7, the unexpected unfolded in downtown Westminster, leaving many in the community alarmed and even more, concerned. At around 8 a.m., skies darkened to an even deeper shade of grey. After days of continuous rain directly preceding this, nobody was particularly amazed at the continuation of the gloomy weather pattern. But then, winds noticeably picked up speed, and the rain quickly became torrential, discouraging anyone thinking of going out, maybe for a morning coffee or breakfast.

Around that same time, the National Weather Service sent out a tornado warning, cautioning locals to stay indoors and seek shelter—something that typically never amounts to much and ends up passing harmlessly; but not this time. What was really behind the thrashing rains and zipping winds, was what was later classified as an EF1 scale tornado that tore through the town, and almost everything in its path.

With winds of up to 90 mph, this whirlwind definitely left downtown Westminster something to remember it by. From road signs, to bank roofs, to entire trees uprooted lying flat on the ground, this Carroll County small town truly saw, and even more so felt, the widespread impacts that this Tasmanian Devil left behind.

The McDaniel community was advised to “seek shelter at your emergency location, stay indoors and remain calm until all clear,” an email sent to all students read. At 8:02 a.m., another email was sent to students advising them not to walk outside on campus, including walking to classes, until the tornado warning concluded. By 8:21 a.m., the tornado warning expired, and students were advised to resume normal activities and proceed to class.

Chief Eric D. Immler, director of Campus Safety, later sent an email to the entire McDaniel community alerting everyone of the closures on Main Street.

“The Westminster Police have requested that no one travel by vehicle or on foot through West Main Street while the roadway is closed,” he wrote. “This is due to hazardous conditions that exist as a result of the severe weather.”

McDaniel student and Westminster local, Chandra Reiff, recalled going home after the storm died down that afternoon and seeing the extensive damage to the yard of her childhood home.

“Two huge trees were completely knocked down in the backyard,” she said. “Luckily, one fell away from the house instead of towards it, otherwise it could have completely destroyed our house.”

Others in the community were not so fortunate, however. One quick stroll down the city’s Main Street revealed just how unforgiving this tornado was. Many individuals had completely totaled vehicles, as a result of trees that had fallen directly on top of them, crushing them almost entirely. In addition to that, many houses around the area had extensive cosmetic damage to their exteriors, leaving owners across town spending their afternoon assessing and calculating costs of repair.

By 10:15 a.m. on Friday morning, the Westminster Police Department Facebook page reported that Pennsylvania Avenue was open for traffic and by 3:15 p.m. that afternoon, W. Main Street was open as well.

On Feb. 8, several roads still remained closed. According to the Westminster Police Department Facebook page, as of 10:49 a.m. on Feb. 9, all roads have been reopened.

Apart from the overt shock and awe of the local community, which was for the most part caught completely off-guard, this town has much to recover from the relentless storm. Directly following the height of the chaos, after winds began to die down, both private and public contractors could be seen hard at work quickly removing the plethora of snapped trees, debris, and the many roofs found meters away from their respective buildings.

Community members, while still shaken by the level of damage in town, and in their own back yards, expressed a deep gratitude that while they may have lost material possessions, mostly everyone in town remained safe and sound, unharmed by the slashes of the infamous tornado, that will no doubt go down in the history of jarring events to take place in the resilient town of Westminster, Md.

The Retirement of Mike Webster: What Comes Next