It’s a new school year (or rather almost halfway through the first semester of a new school year), and this new crop of freshmen is all but doing my job for me! So without further ado, here is a not-so-concise list of the debauchery and stupidity of the McDaniel populace.

First off, there were a lot of fire alarms going off. And I mean a lot. North Village has had three false alarms for cooking smoke, and Pennsylvania Avenue has had two, proving that McDaniel still needs to schedule mandatory basic cooking classes before allowing students to live in apartments.

There was also a false alarm from an electrical fire in North Village, no doubt caused by the lovely college habit of daisy chaining power strips around the room in a manner that lives on in the nightmares of fire marshals worldwide, two malfunctioning fire alarms on Pennsylvania Avenue, and two “unidentified cause,” fire alarms in North Village (whatever that means).

Also one accidental fire alarm went off in in Little Baker, which I can only assume was either the work of the most blasphemous of pranksters or potentially one of the first trumpets of Revelation (keep a watch out for fiery hail).

There was also a case of Malicious Destruction of Property in Gill Stadium, an act still less criminal than how poorly our football team sometimes performs (though as long as their playing gets us free food and tailgating, the campus will support them through thick and thin and even more thin).

There were two cases of larceny in the Doctor’s office and Hoover Library, proving that A) our generation truly has forgotten that the point of libraries is that they’re free WITHOUT stealing them and B) that students think that of all the things to steal on campus, they choose limited supplies of pretty low level medication from a doctor’s office over, I don’t know, $5,000 computers.

There was also a hit and run on campus, meaning for once a car on campus was running over something other than an unexpected and damaging speed bump.

The students of McDaniel yet again fail to realize the modern marvel that is the bathroom, given that there were two cases of public urination recently. One was in North Village, and the other was in Gill Gym, a building legitimately filled with facilities that all have places to pee. So seriously, whoever this was really has no excuse, but given they were also charged with disorderly conduct, there just maybe, quite possibly was alcohol involved.

Lastly, there were two cases of possession of controlled dangerous substances and their paraphernalia (both in DMC), though given the amount of people posting about weed on McDanielSnaps, that number seems low. Not to mention its 2015; like three states have legalized and even Maryland decriminalized…you’re not THAT cool for smoking weed guys. Really.

Anyways, keep up the “good work” guys, and be warned. I’m on the radio too now…so all I have to say is: 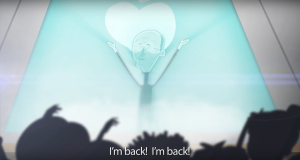 Fear and Loathing in the Caucus