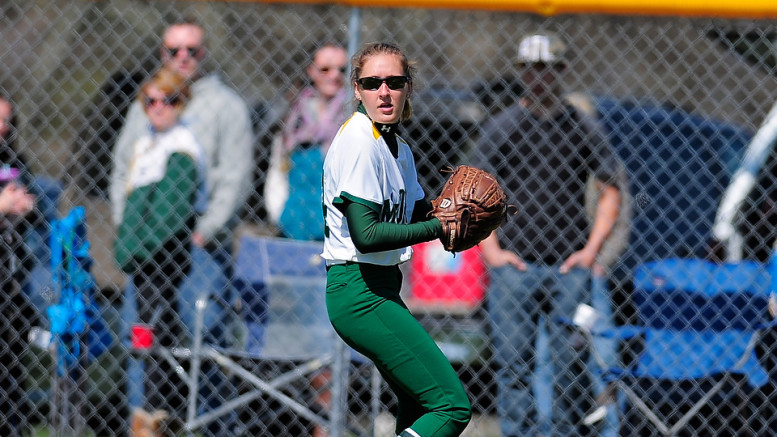 The Green Terror faced off against Haverford College in a doubleheader on Saturday.  McDaniel (9-9, 1-1) and Haverford (8-8, 1-1) met for their first Centennial Conference games of the season. McDaniel took the first game 11-10 but dropped the second game 3-2.

McDaniel got off to a great start right from the beginning in the first game.  Lindsey Miller got into rhythm early with a lead off home run to right field at the bottom off the first inning. Miller continued to be a standout player for the rest of them game.

At the bottom of the second inning, with two players on base and Miller up to bat again, she hit a home run to centerfield, sending Carly Deichman and Taylor Fletcher in for scores and taking a 4-1 lead.

The Green Terror didn’t plan on slowing down at all.  By the bottom of the third, Fiona Johnson and Tayler Hishon also scored runs.

Haverford managed to rally back in the seventh inning to tie the score at 10 with the help of Emily Gorman and Alex Craig.

With the game tied, the Green Terror were up to bat and looking to finish this game with a victory.  At the start of the bottom of the seventh, Roxana Aviles hits a double to centerfield, followed by a Lindsey Miller walk to first and a Payton Lewis bunt single, loading the bases.

Olivia Kipe was walked to first, sending Aviles in for the walk-off run to win the first game.

Each team was scoreless for the remainder of the game.  The game went into extra innings and eventually came to an end in the ninth when Haverford scored and McDaniel could not respond.

The softball team plays at Dickinson on Tuesday, March 29 in another doubleheader beginning at 5 p.m.