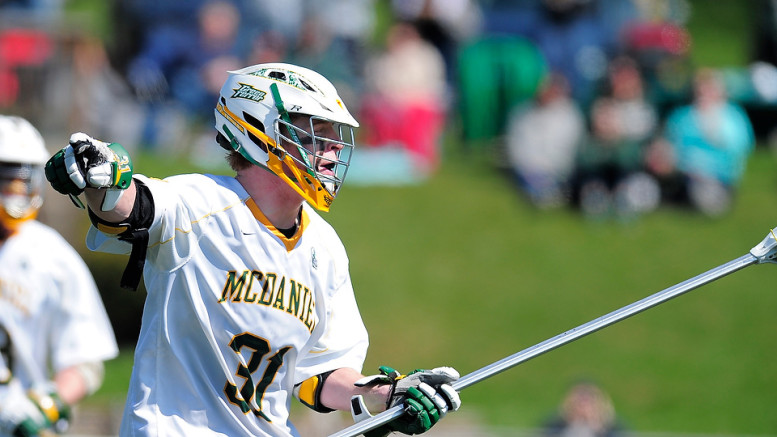 The men’s lacrosse team played a Saturday afternoon home game against the Washington College Shoremen. The Shoremen came out strong and ended up dictating the game, causing the Green Terror to fall 13-6 in the Centennial Conference matchup.

The first quarter started off with a Shoremen goal with 7:26 remaining in the period. Junior midfielder, Quinn Lykens, scored one for the Green Terror with 2:01 remaining to even the score at 1-1 to end the first.

Washington dominated the entire second quarter, scoring six goals while the Green Terror scrambled to play defense. While the Green Terror were picking up as many ground balls as they could, senior goalie Eric Ritchie was defending the goal with three saves in the span of less than thirty seconds.

The Shoremen scored the first goal of the second half with 12:23 left in the third quarter. Senior midfielder Zach Monzo scored for the Green Terror with 11:34 left to play, bringing the overall game score to 8-2 with Washington still in the lead. Washington went on to score three more goals during the quarter.

Washington scored within the first minute of the fourth quarter, pushing their lead to 12-2 over McDaniel. The Green Terror then went on a three-goal scoring streak with two goals from junior attacker Timothy McNichol and one unassisted goal from sophomore attacker Kyle Savick. With only 26 seconds remaining in the game, sophomore attack Michael Long netted one off a man-up pass from senior Jason Lawrence.

McDaniel had 16 saves compared to Washington’s 8 but the Shoremen had 24 turnovers paralleled to the Terror’s 23. McDaniel scooped up 27 ground balls, with junior defenseman, Will Kroppe, taking 11 ground balls out of the 27 and causing five turnovers. Washington had 49 shots for the game, with McDaniel trailing at only 20.

The Green Terror play again on Wednesday, March 30 at 4 p.m. at Dickinson.