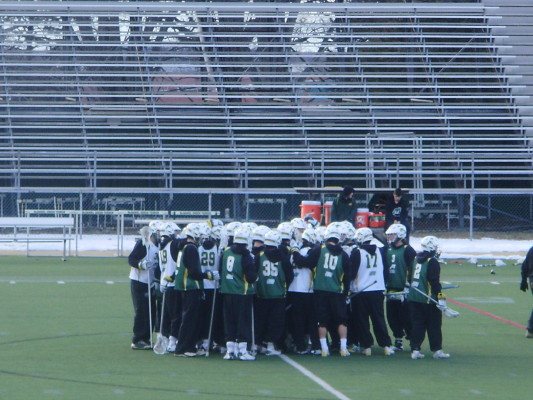 The men's lacrosse team huddles up. Photo by Elec Trainor

The men's lacrosse team huddles up. Photo by Elec Trainor

For Green Terror Men’s Lacrosse coach Matthew Hatton, the time is now for his team to make a run at the NCAA tournament. “We have been knocking on the door the last two years,” said Hatton, “and we want to kick that door in this year and play on the biggest stage that there is for our sport: the NCAA Tournament.”

With a majority of the team returning from a year ago, while infusing transfers and freshmen, the Terror may in fact be ready to kick that door down and win the Centennial Conference Championship, after making it to the tournament the past two years.  “I don’t think anyone on our team is satisfied with just making it to the playoffs,” said junior DJ Rickels. “I believe that we have a great opportunity to make it to the championship and even to the NCAA’s.”

The key to their success will be Rickels, the returning attackman. After being named All-American in his sophomore season, Rickels looks to improve even more entering his junior year. “I have been focusing on some things that I did poorly last year, to help improve myself as a player. In lacrosse like many sports there is never really an off season, we are always trying to do whatever we can to make ourselves better,” Rickels said.

Coach Hatton feels that Rickels will be integral to the overall achievement of the team. “We believe that he is one of the elite attackmen in the entire country for Division III…DJ is going to get a LOTof attention on that end and we really need him to step up and embrace his role this spring. I have al lthe confidence in the world in his ability and preparation.”

However, it is not only Rickels, but the overall talent of the entire team that has the McDaniel community thinking championship lacrosse this season. Senior defender Matt Mummert can see the potential all around him. “We have the most talented team that I’ve seen since I’ve been here at McDaniel, so I think this could be the year to hopefully make to the championship.”

Besides the individual talent, a strong team bond will propel the Green Terror to championship levels according to Rickels. “The team we have this year has the best chemistry as a team and family, since I have been here at McDaniel” explained Rickels.

For Hatton, the season cannot begin soon enough. “We like our guys and we are eager to get out there and really compete. I would say that we will do our best to prepare and put our guys in the best places so that they can be effective and successful. We are really excited to get the season started!”