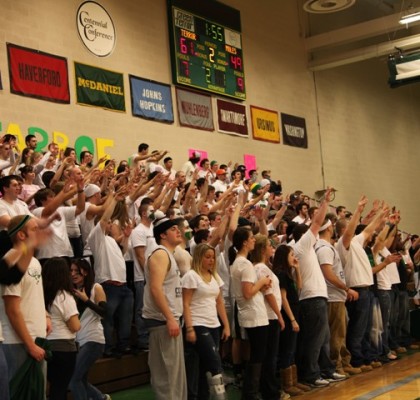 Student-fans at the last basketball game of the season against Mulenburg. Photo by Omar Brown. Student-fans at the last basketball game of the season against Mulenburg. Photo by Omar Brown.

Having started playing basketball earlier than the development of his memory, Jarboe was destined to play throughout elementary, middle, and high school. Jarboe also played football, but basketball was his true gift and zeal.

As a 6’1’’ guard for Urbana High School in Frederick Maryland, Jarboe was looking to play at a Centennial Conference school. During an overnight at McDaniel with a player on the team he played with in high school, Ryan Brandanburg, Jarboe was sure that McDaniel was where he was meant to be.

As a freshman Jarboe was a new guy on the block fighting for a position on the court.  Sophomore year, he played every game, with a team he regarded as one of the best in McDaniel’s history of men’s basketball.
Now being a four year collegiate athlete, Jarboe looks back and sees a change in his play compared to his freshman year. He states that he is “more calm now, mentally stronger, and a smarter player.”

Going into the season Jarboe was not even aware of the record. He recently found out before his game against Muhlenberg that he would tie the record that day.  His focus was to play well, make the Conference tournament, and win.
Previous record holders Buggy Berry, Steve Wilson, Ryan Finch, and Chad Arrington, who all graduated in 2009, were the ones who made Jarboe aware of his chances of eclipsing their record.

Although there was not a ceremony or trophy to be presented, Jarboe thought it was “really cool” to be able to call himself the most “winningist” player at McDaniel. He hopes the juniors will not break it, but he admits they probably will. Jarboe also confesses that his most “winningist” title as an athlete will look good on his resumes for graduate school and jobs.
“I have a good chance to build up the record,” Jarboe explains, having one season game left, and then possibly two more in the Centennial Conference Championship.

The first Championship game depends on their last season game. If they win, the Green Terror basketball team will travel to Franklin and Marshall to play Dickinson. If they lose, as a fourth seed they will have home court advantage against the fifth seed.
Additionally, Jarboe’s friends have put together a bus so the many McDaniel students that are “Jarboe” fans can come and watch his last few games. Jarboe declares the efforts that the students are putting forth to come watch the Green Terror face Gettysburg as, “exciting, a lot of good motivation.”

Jarboe reflects on his last season as a Green Terror basketball player saying, “This is my last chance, I don’t want it to end.”