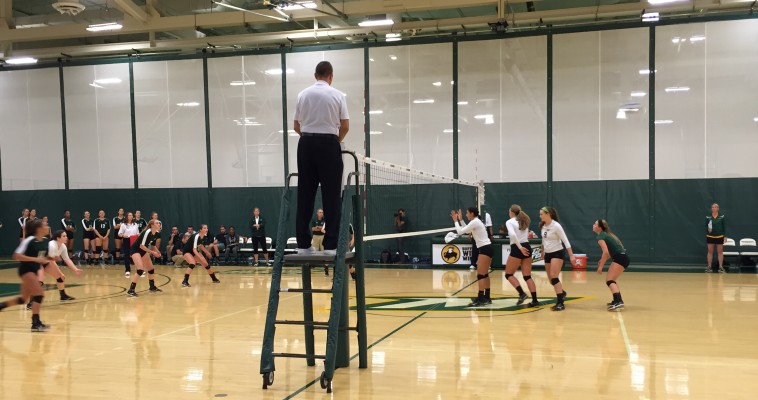 McDaniel sets up their offense during Wednesday's game

The Green Terror faced the Stevenson Mustangs on Wednesday with the hopes of continuing their 3-game winning streak, but it was snapped with a three-set loss.

The second set began like the first, when the Mustangs took the lead by 3 points early in the set. The Green Terror bounced back with kills from junior Lexi Corral and junior Caroline Savin, but it was not enough to secure the win for the set. Stevenson captured the second set 25-18, with 9 kills, while McDaniel had 7.

Senior Colette Kellen, scored the first point of the third set for McDaniel. The Mustangs took control of the set by scoring the next 6 points which eventually led them again to victory over the Green Terror, 25-13. Stevenson had 10 kills during the third set compared to McDaniel’s 5.

“Stevenson was a great team and we definitely didn’t have our best match against them, but it shows us what we need to work on to get ready for our big conference games,” said Kellen, when asked about the match.

“It was a learning experience. We definitely have a positive outlook for the rest of the season, especially with conference play. We are really excited to play some of the teams we lost to in five sets last season,” she added.

The Green Terror will play at Ursinus in a Centennial Conference match-up on Saturday at 1 p.m.