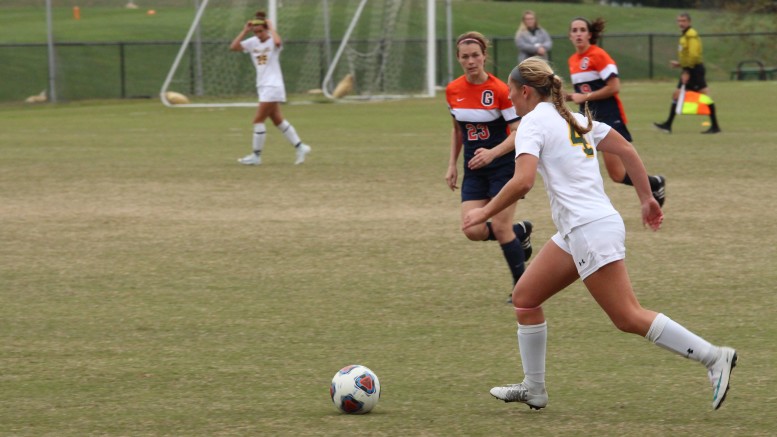 Alyssa Johnston found the back of the net for the first time in her collegiate career Wednesday at the Green Terror Soccer Complex to give McDaniel the 1-0 edge over Gettysburg in Centennial Conference tournament play.

“It was awesome to be able to score in such a critical moment for my team,” said Johnston, “I was so happy to be in the position to score for them.”

In classic Green Terror fashion, the game’s lone goal started with an Abby Keen corner. After a frenzy in the box, McDaniel’s Lindsey Farrell collected the ball and shuttled it out to Johnston up top who fired a bullet past a stunned fifth-seeded Gettysburg (9-7-2, 6-4).

“Every chance mattered and every shot had to be on frame,” said Johnston. “I knew that because I was holding outside of the box corner I would be open at the top of the box and as soon as Lindsey looked up and found me I knew I had to take the shot and put it on frame.”

“It just so happened to be a goal.”

Through the first 90 minutes in regulation, McDaniel held the 17-3 advantage on shots with excelled opportunities from four corners to no avail. Three more attempts and one corner was all they needed to end the first round game.

“Today was completely a team effort and I couldn’t have done it without my teammates,” said Johnston. “Everyone played with such heart and energy. I wouldn’t have wanted to celebrate a win any other way!”

McDaniel’s last three goals have all been scored by the defense; two by Katie Clawson on Sept. 25 at Dickinson and Johnston’s goal today.

“Teams have been packing it in lower which means the space is where our outside backs are,” said head coach Sandy Lagana. “We’ve been working with them on it because that’s what we’ve been given.”

Defenders Marissa Funke and Kristen Upton have each scored two goals this season as well, and Jackie Fahrenholz has one to her name.

“I’m proud of them for executing,” said Lagana.

Freshman Sydney Kelly made two saves in her 10th game in goal for the Terror.

The 200-something fans gathered for McDaniel’s fourth straight appearance in the conference tournament were put through a whirlwind of emotions during the 95 minute game, many of them claiming to have aged a couple of years from the stress of a 0-0 regulation game.

Lagana had a slightly different take.

“I wouldn’t call it stressful,” she said, “it’s more exciting from the sidelines cause at that point it’s in the player’s control.”

McDaniel previously beat Gettysburg 4-0 on Oct. 20 in Westminster, a game that ballooned their conference record to 2-0 after five straight wins.

The Green Terror travel to Baltimore Saturday to take on the top-seeded, conference-undefeated Blue Jays at 4 p.m.

Johns Hopkins toppled McDaniel 1-0 in their Oct. 11 match in Westminster, their only previous meeting this season.

When the two teams met in the conference tournament last year, the Blue Jays defeated the Terror 3-1 in the championship game, two weeks after McDaniel won the regular season match 3-2 at home.

“We are going to take these next two days to prepare ourselves and help ourselves everyday to be sure we’re ready to play Hopkins,” said Johnston. “It feels really good moving forward as we work so hard year round to be given this chance.”