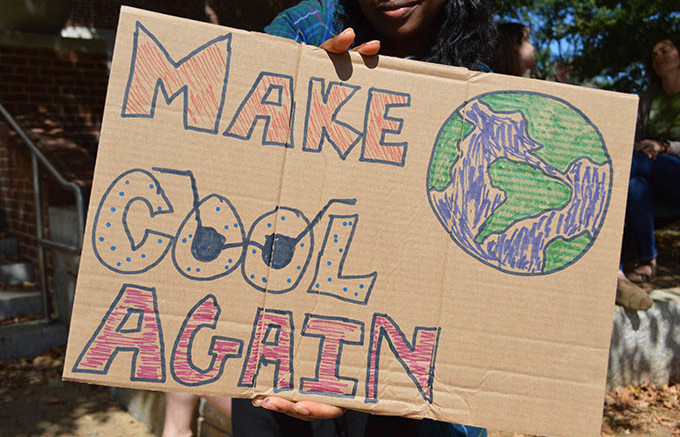 A student shows off a protest sign during the climate strike on Sept. 20. (Shaquille Tairellil / McDaniel Free Press).

Every experience one has in college is an opportunity to learn, and participating in political discourse is no different. McDaniel students recently exercised their voice and brought some helpful commentary, but left the opposition in the cold.

In solidarity with millions around the world, McDaniel College students and faculty protested the general inaction towards remedying and reducing climate change. The event was held on Sept. 20 and organized by Green Life, an environmental club, and the Progressive Student Union (PSU), a group driven by political action and social reform.

The event began by recognizing the collective effort, “a celebration of community and unity,” said Gunnar Ward, a speaker at the event and a member of Green Life. Ward rallied the students and faculty around hope in the face of adversity in the light of environmental trends and our current political climate.

“We are frustrated with the apathy in the government to pass legislation to make sure that our Earth is green and clean,” said Ament Akan, a political science and philosophy double major. Akan spoke on the importance of honing in on the economic inequality and the value of the Green New Deal. Additionally, she addressed the need for corporations and large actors to do their part.

While many students and faculty were constructive with their words, it was disappointing that some speakers took the opportunity to name-call and assign blame. Cursory comments were made towards corporations, governing entities, and the opposition. In demonizing the opposition, the matter of climate change seemed to polarize before the spectators’ eyes.

Additionally, the event was lacking in educational tools and action methods. In an issue so based in data, it was unfortunate that few hard facts were shared. There was also no initiative to educate those who were not attending the rally. There was a mention of “talking to them,” but the language and information to do so was not shared. The idea of action was vaguely tossed around. There was no mention of the volunteering one could do in vital small elections taking place in neighboring states that could dictate our future as a country, or even discussion of what we could be doing on our own campus to have an influence.

A college campus is a Petri dish for experimentation and exemplification. If the campus body cannot exhibit appropriate and effective discourse, how can the rest of the world, big corporations and all, be expected to do just that? Energy would be best spent on listening to and educating the opposition with empathy and hard evidence. On top of that, formulating a cohesive and consistent message will also indicate a strong, confident front and would ensure that no one’s words are taken out of context.

The students and faculty of McDaniel exercising their voice are not doing so in vain, but we all have more we can do to model the kind of behavior we hope to see in the world. The protest was a great opportunity to engage the student body in world politics and now McDaniel needs to collectively move forward in creating visceral change. We are at the point where gathering is not enough. We need to be taking action and real measures towards a greener future.