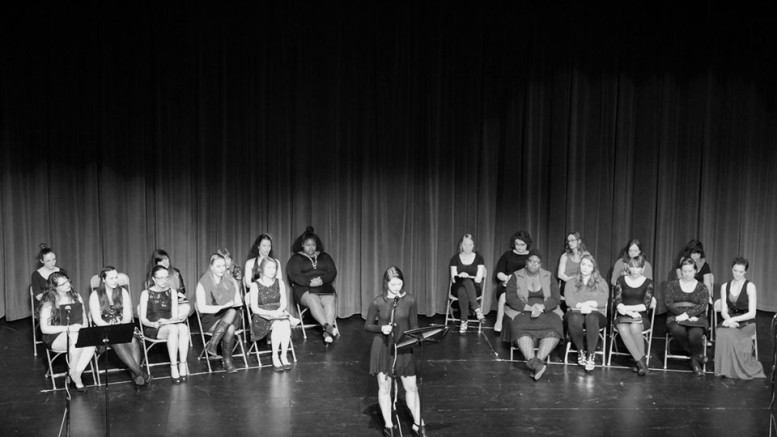 The Vagina Monologues made its annual return this past weekend, with two showings, one Friday night and one Saturday night, marking the 13th year of McDaniel’s production of the play.

This year’s director Miranda Schmidt worked with a cast of 22 wonderful and talented women from McDaniel. Among the young cast was the production’s advisor and English professor Dr. Becky Carpenter. Dr. Carpenter teaches one of the most popular First Year Seminars at McDaniel: Gender and Culture in Literature. 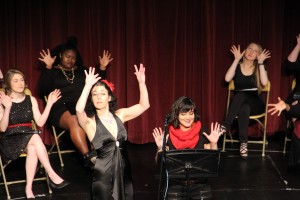 Dr. Carpenter, advisor for the Vagina Monologues, and Cris Juarez

This year saw an increase of attendance from the community, Dr. Carpenter remarks. However, not much of the McDaniel community was seen at the show due to other conflicts, including sorority rushing and basketball games.

After 13 years, the Vagina Monologues have become part of the McDaniel culture, but have you ever wondered how the production came to McDaniel? Here’s some of the history of how it came to McDaniel and why it prevailed.

The Vagina Then: History of the Monologues

The play became one of the key components of V-Day, a movement initiated by Ensler to promote the end of violence against women and girls across the world. This movement has raised over 100 million dollars, which goes in aiding organizations all around to protect and empower women.

As is the case with any play, the rights to it must be bought before a production can be staged at any given theater. However, Ensler allows colleges to use the play without buying the rights to it as long as the production is presented as a fundraiser.

Rebecca Orenstein and Dr. Carpenter decided to bring the production to McDaniel 13 years ago. Coincidentally, this was also the first year Dr. Carpenter taught this play in her FYS. 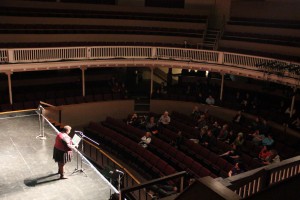 The production gained immediate popularity among students. From that point on, students have procured that each year the play comes back to McDaniel to increase awareness of the many issues and injustices women suffer as well as to enjoy the monologues.

The Vagina Now: What Goes Behind the Curtains

Production started back in Mid-November with auditions for the student body. Due to its popularity, auditions to the show are required, but most girls get a spot in the show regardless.

“Pretty much any girl who auditions gets in,” says Miranda. “The reason is because each year we see an increase of girls who audition, and all of them come from diverse backgrounds, which is definitely a plus for the show.”

After the auditions, the cast meets twice a week for rehearsals. “One of the biggest challenges for the show is the availability of the cast,” remarks Miranda. She continues to say that this year was especially difficult due to the large nature of the cast. 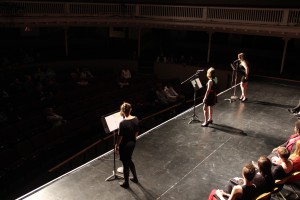 When asked why she decided to be part of the show, Cris Juarez claimed, “I did it because it looked fun. I like performing and I’m a strong feminist.” This was Cris’ first year performing in the show, but we sure hope to see more of her next year.

The cast is a crucial part of the show, but without a director they will not have direction. When discussing the roles of the director, Miranda expressed that although it is an enjoyable experience, it comes with its down sides.

“The director has to do everything,” Miranda says regarding her role. The reason for this is the fact that there are no co-directors or administrative positions for this production, and as thus, the director is in charge not only of managing rehearsals and the cast, but also outside business, such as advertising to the public and talking to administrative offices.

At the end of the show, I asked a few members of the audience for their opinion of the show. Roger Isom expressed his enjoyment, “I enjoy it. It’s refreshing to see students on campus be excited for what the movement is about.”

“It’s awesome!” states Sarah Edmonds. “It’s good that they have variety; it goes from serious to funny.” 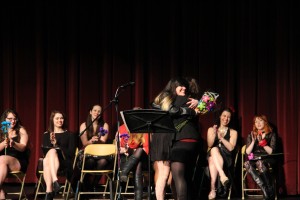 Miranda Schmidt passes the role of director to Jen Shillingburg.

Miranda shares the same thought with Sarah. During her interview, she stated that “It [the show] not only makes the audience laugh but it also educates them.” She added that “without education, we don’t have change.”

As part of the tradition, directors are chosen by the last director. Following this tradition, Miranda chose Jen Shillingburg as next year’s director.

When asked what we can expect for next year’s show, Jen stated, “I want to work with emotions and emotional direction.” We can only expect more greatness to come.

Writer of the Week: Neil Gaiman