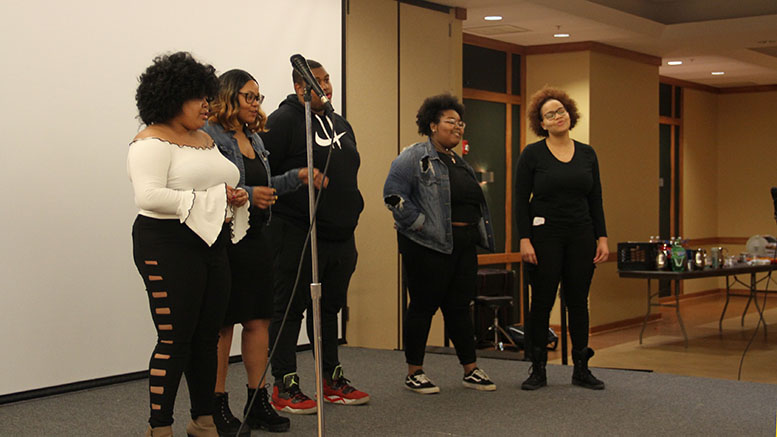 The room buzzed with “oohs” and “aahs” as the student-led choir sang gospel songs. Dancers swayed their bodies to classical and contemporary hits prominent within black culture. A poet trotted across the stage and discussed her longing to return home to the continent Africa.

On Feb. 27, McDaniel’s Voices of Praise club (VOP) collaborated with the Black Student Union (BSU) to form the Soulful Music Festival, a night of cultural celebration in the Forum. To culminate Black History Month, students across campus gathered to explore African American music through its various art forms, its roots, and its impact on American society from generation to generation.

“This event is really big. There are people who listen to music all the time and don’t realize that without African influences, this music right here would not exist.” Sophomore Jamar White, President of BSU said. “Jazz, Rock and roll – they all have pieces and influences from African and black music.”

At the show, audience members had an opportunity to experience instrument-based compositions, acapella songs, and a music style typically heard at black church services.

From hot dogs to chips to desserts, BSU funded food platters and beverages for the festival. However, the majority of the event planning came from Senior Akira Westbrook, President of Voices of Praise and Secretary of BSU.  “This was Voices of Praise’s first event. We really just became established this year,” Westbrook said, “but be on the lookout because this is the first of many and we’ll have other activities to come!”

“This is an idea that Akira had, and she brought it up to BSU during one of our e-board meetings in early February. We talked about it, liked it, and decided to collaborate.” White said. “This honestly came together quickly. We saw that the Forum was open during Black History Month, so we booked it. After that, it was getting members of Voices of Praise and others to perform.”

The list of performers included students from numerous class years and talents. Whether singing or spoken word, audience members shouted out words of praise during performances and collectively encouraged entertainers to showcase their abilities.

One performer in particular, Senior Dionna Newsome said, “Normally, I write my own poetry down, but don’t perform it as much as I want to. It was good to be able to perform and receive support on what I spoke about.”

Westbrook agrees that the event was not only a platform to unify minority students, but also an outlet for students like Newsome to share their own culture and experiences.

“I think it’s very difficult being a student in college. People have jobs and don’t really have the free time to do the things that they love.” Akira said. “They have hidden talents. There are a lot of singers that are not in music groups and dancers that are not in dance groups because they just don’t have the time.”

To address this, both Voices of Praise and BSU set up trivia questions, dance competitions, and free giveaway items during the show to help students learn more about how they can express themselves and their black culture.

White said, “Well, we are a minority on campus, but we are a growing minority. Every year, the amount of people of color on campus grows larger and larger. Appreciation of black culture and black people is necessary – we’re an integral part of the foundation of this country.”

White continued, “Without black people, this country wouldn’t be where it is today. We came here forcefully through slavery and there needs to be some kind of appreciation, a form of reparation to an extent.”

As the event came to a close, audience members stood up in unison. Together, a medley of voices began to rumble. With smiles from some and serious expressions from others, staff and students around the room sang alongside Voices of Praise– ringing out the tune to the Black National Anthem.