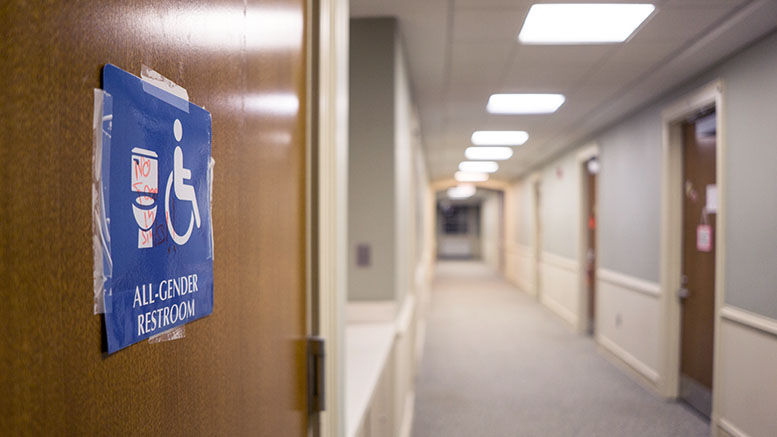 A private bathroom in Blanche. Photo by Kyle Parks.

The roommate pairing and room assignment process can be a stressful, uncertain experience for incoming students.

But for transgender, non-binary and gender non-conforming students, in particular, finding a comfortable living situation is often a great challenge.

Many colleges and universities have designated gender inclusive, or gender neutral, housing, which allows for two or more students to live in the same room regardless of gender identity or legal sex. Regional institutions, such as Towson University, University of Maryland, Goucher College, and Gettysburg College have done so. McDaniel has not.

However, while McDaniel lacks a formal policy, gender inclusive options do exist. The most evident examples include those with only private bathrooms – like North Village, Garden Apartments, DMC, and Pennsylvania Avenue houses.

Traditional dormitories for upperclassmen can also be gender inclusive, as Blanche and McDaniel Hall each have a private bathroom on their first floors, and ANW has multiple bathrooms per floor, encompassing male and female.

“I chose Blanche my junior year knowing it had a gender neutral bathroom and purposely chose the floor it was on,” said Jay Heinzen, a senior transgender student.

A major struggle is accommodating incoming first-year students who are mostly limited to Rouzer Hall and Whiteford Hall, which lack private bathrooms.

A recent attempt by Residence Life to designate a small floor in Whiteford as gender-neutral fell through due to Carroll County’s addition onto the Standard Plumbing Code, which requires bathrooms to be designated as male or female. The floor in question has only one communal bathroom. “We could give [students] permission to go use the men’s room, but there still has to be a men’s room and there has to be a women’s room,” said Michael Robbins, the director of ResLife on campus.

However, Robbins acknowledges that renovating a facility to add an extra bathroom can be costly: there’s the cost of adding the bathroom itself, then the possible loss of room in which to house students and finally the loss of revenue from summer camps, as many renovations take place in the summer.

Internally, the school was concerned with space. During the planning process, Robbins wanted to know, “Will I be able to fill it?” Rouzer and Whiteford are the only two halls large enough to accommodate sizable first-year classes, and the school wants to keep these students together.

Some parents’ preferences towards housing also pose an obstacle. “During admitted students day, I still get questions from parents [asking], ‘Is there an option to live in an all single-gender building?’” Robbins said.

First-year student Matt Pelletier lives on the male wing of his floor in Rouzer. “Michael Robbins found someone who was transgender [to room with me], but then their parents made them live on the female wing and I wasn’t comfortable with that, so now I just have a super single,” Pelletier said.

“I was placed on an all-female floor and was required to walk down to the floor below my room to use the bathroom and shower,” Karl said. “I would get weird looks and comments by the females that lived on the same floor as I.”

ResLife, however, continues to work with students on a case-by-case basis to place each student in a comfortable environment.

“It was fairly easy to get a single for myself this year, and for the most part my dorm situation has been pleasant as a result of it,” said first-year transgender student Erin Leonard.

“They made sure I had a single and lived on a less crowded floor because I lived on the floor of my sex, not gender as requested,” said Heinzen.

There aren’t easy solutions for providing first-year students with as comfortable options. Even at schools with formal policies, such as Gettysburg College, first-year and transfer students will still need to have a conversation with Residence Life to figure out a housing situation in which they’d be comfortable, although the college doesn’t require that students state why they want gender-neutral housing.

Goucher College allows new students to identify as transgender or non-binary on their housing application, then works with those students. Meanwhile, at New York University, students have the ability to opt in to gender-neutral options in the initial roommate survey.

Smaller colleges like McDaniel typically have a harder time providing gender inclusive housing to first-years. A school would need first-year housing with multiple public bathrooms per floor and/or private bathrooms. University of Maryland, College Park, a much larger public institution, has gender inclusive rooms with private bathrooms within traditional dorm halls; however, renovating halls to accommodate this would be hard to fund at smaller colleges.

Students on campus continue to hope for a gender inclusive option for new students. “I think it would be neat if we set up one suite in DMC as a designated gender inclusive suite, for example,” said McDaniel College Gender & Sexuality Alliance treasurer Lindsey Franks.

“The best bet might even be having a floor or a house for individuals that are LGBTQ+. This would provide a safe and comfortable placement and housing for individuals that start attending McDaniel,” Karl added. “I know that personally if this was an option that I would take place in it and help to make this a better school.”

The school, however, will act if students more actively advocate for more gender inclusive options, Robbins said. Time will tell if this happens in the near future.