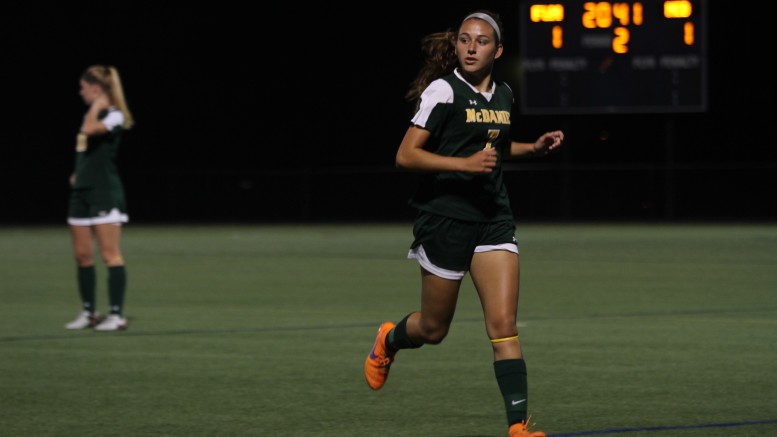 The sophomore’s goal evened the score for McDaniel (8-3, 4-1) just two minutes into the second half.

The loss is the first in the Centennial Conference for the Green Terror this year and pushes them out of first place behind Johns Hopkins (4-0). It also comes as the Diplomats’ first conference win.

“I think statistically we probably out-played them,” said head coach Sandy Lagana. “It’s sports and we’ve been really lucky the last couple of years getting away with all those scores and wins.”

McDaniel outshot the Diplomats 13-10 and held the edge 8-3 on corner kicks, despite the score.

Leoni opened the scoring to put the Diplomats ahead 1-0 at the 25:53 mark.

The Terror would get off seven shots in the first half to no avail.

“I told the girls it’s about character and how you bounce back. It’s one of those games you’ve got to have a short memory for and move on,” said Lagana.

Fahrenholz tied it up with her shot from the 25 which slipped through the hands of Franklin & Marshall goalkeeper Gabby Panayotakis into the corner of the net.

The score remained tied 1-1 through the end of regulation.

Not a minute into overtime, Leoni found teammate Emily O’Hara from the midfield. O’Hara finished the ball with a shot through McDaniel goalie Sydney Kelly, ending the game.

Kelly made three saves on five shots. Panayotakis made two on three shots.

Except their season-opening loss to then-No. 4 William Smith, McDaniel had been undefeated until Sept. 26 when they lost 1-0 at Goucher. They have since gone 1-2 while outscoring opponents 6-4 thanks to a 5-1 win against Washington College.

The Green Terror has now been without all-American goalkeeper Sarah McDonald due to injury for three full games. Three-goal scorer Kirsten Gibson has been sidelined since the Terror’s Sept. 23 game. Lagana was unable to comment on the status of either player.

“We always want to be able to play with a full team,” said Lagana. “We hope that over the next two weeks we’ve got closer to a full team.