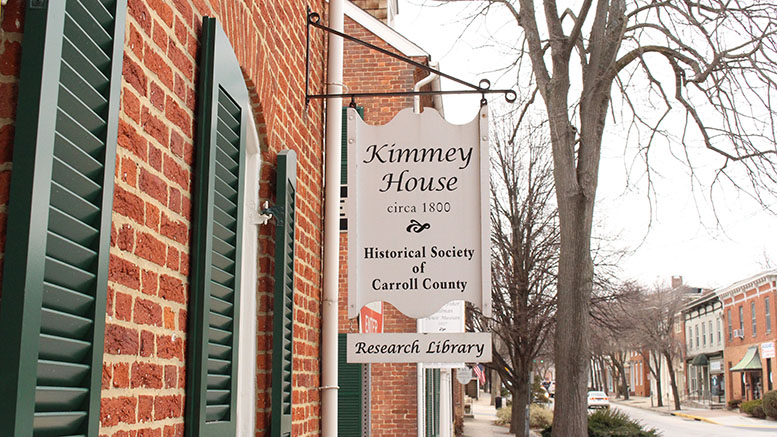 Inside, staff at the organization work to preserve and teach the county’s history: they plan full calendars of events, gather historical Carroll County artifacts for their exhibits and research library, and stock the museum shop with books and items from local consignors. Right now, one item on the Historical Society’s agenda is receiving extra attention: getting young people involved.

In particular, the Historical Society staff and volunteers are reaching out to the college-aged audience of Carroll County, including, of course, students at McDaniel.

“Everybody says, ‘How come we have nobody in this age group?’” said Gainor Davis, executive director of the organization. Davis, who has served as head of the society for three years, sees gaining involvement from college-aged members of the community as a priority for the Historical Society.

An overwhelming majority of the Historical Society’s membership are baby boomers; only a handful are millennials. Davis suspects the younger generation already has a lot on its plate: going through school, starting careers.

Davis also guesses that a lack of participation from this age group stems from history in school classrooms — where most learning comes from books rather than from interactive activities.

One key to gaining a following of college students in the future, Davis believes, is to compensate for this gap in interactivity with children at an even younger age.

“Part of our strategy is to try to make our school adventures more proactive,” she said. In addition to Past Times for Children, a monthly class where children learn about life in Carroll County during the 19th century, Davis and her colleagues are developing more interactive activities for young children, such as traveling trunks.

These are cases of artifacts that Historical Society staff bring to Carroll County elementary schools: each contains items relating to historical themes, like industrialization, that students can pick up and look at.

“That’s outreach,” said James Lightner, Ph.D., McDaniel College’s historian, who is a former chairman and current member of the Historical Society’s board of trustees. “We’re trying to reach a whole other facet of the community through the visits.”

Last year, the Historical Society invited Carroll County fifth-graders to hand-pick historical artifacts and create exhibits for third-graders. Lightner served as a docent for these exhibits, and he expects this year’s fifth- and third-grade classes to be invited again.

Current older students are a focus at the Historical Society as well.

“One of the things we have been doing is working with interns,” Davis said. Over Davis’s three years at the Historical Society, she has hired a number of high school and college students, two of whom have been from McDaniel.

Lightner also likes the prospect of having more college interns at the organization, even if they are not majoring in history. He noted that dramatic arts majors, or even computer science majors, could benefit the Historical Society and learn about how management works in this type of organization.

Students will also see a discounted price for membership soon.

Davis also plans to hold membership surveys and focus groups to find out what might bring more people to the Historical Society. “We shouldn’t be telling people what they want; we should be listening to them,” she said.

Several McDaniel students have already worked with the organization.

In 2015, students in one of the college’s theater classes wrote and performed scripts for a historical walking tour of downtown Westminster, where they played the roles of Westminster citizens during Corbit’s Charge, a Civil War skirmish that took place in the town in 1863.

Last year, the president of the college’s history club, Matthew Hopson, along with several club members, volunteered as extra hands moving artifacts and books while the Historical Society reorganized its space.

“I wanted to have the club do service that would be benefiting another organization with similar goals to ours — like an organization who promotes the study and interest in history that our club tries to promote as well,” Hopson said.

The junior would like to see more young people become involved in historical organizations as well.

“If more people realize the impact that history has had on contemporary events,” he said, “I think that would be a way for more and more younger people to become interested in it.”

“We need to give young people the opportunity to learn how exciting history can be.”

The Historical Society of Carroll County is located at 210 E. Main St. and is open Monday through Saturday. Davis can be contacted at 410-848-6494 or via hsccmd.org.

Can’t We All Get Along?

A New Take on the Old Pygmalion