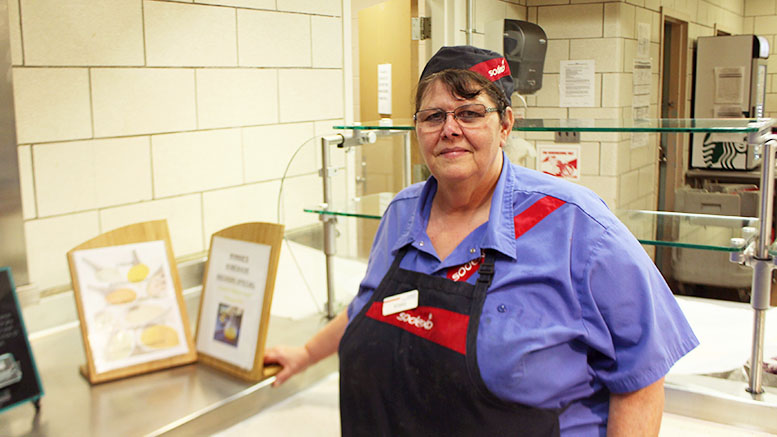 Each weekday at the start of lunch, Bobbie Pfeiffer stands ready at her salad station in the corner of Englar Dining Hall. Students start to line up, ordering their salads—perhaps with one of Pfeiffer’s original dressings—and the line quickly grows longer. McDaniel students and Pfeiffer call each other by name, chat about the day and, more often than not, they’ll find something to laugh about.

For nearly ten years Bobbie Pfeiffer, known to students as “Ms. Bobbie,” has served as McDaniel’s go-to custom salad-maker. It wasn’t always salad for Pfeiffer, though.

“I had thirty-five years of waitressing experience,” Pfeiffer says of her previous job at a small diner in Hanover, Pennsylvania. She knew her customers’ names and their breakfast orders when she’d greet them in the early morning; she lived close to work—but she was in for a change after her move to Westminster.

Pfeiffer moved in with her boyfriend (now husband) Cliff, and her waitressing job suddenly became more of a burden. Work for Pfeiffer was now twenty miles away. “It was just too far to drive back and forth anymore.”

Not long after her move, however, a position opened at Glar. A new chef headed the dining hall, and he needed someone to man a salad bar where students could order custom salads. Pfeiffer got the job the same day she handed in the application.

When Pfeiffer started working in Glar almost a decade ago, her salad station functioned a bit differently. Only a couple salad dressings were available, and Pfeiffer mixed all her salads by hand in one big bowl. She’d come home every day smelling like dressing. “I’d literally have to put my clothes in a different hamper ‘cause they reeked of Caesar dressing,” she says, rolling her eyes and laughing.

Ten years later, after several salad station location moves and corporate changes, Pfeiffer now has a variety of dressings, which she stirs in individual salads with a pair of tongs. She even makes some of her own.

“Sometimes I make a dressing two or three times before I get it perfected,” she says of her unique dressings. Alongside the classics like Caesar and Ranch, Pfeiffer has several custom creations which she makes specially. Her different-flavored dressings were inspired during a period when the salad station faced the drink machines, before Glar was renovated. Looking at the juice machine day after day, she got the idea to alternate the juices in her recipes. “Why can’t I just start switching the juices [in the dressings]?” she recalls thinking. One dressing, lemon poppy seed, she makes with lemonade and real lemon juice—“not that bottled stuff,” she clarifies.

Her creativity doesn’t stop with her salad dressings. Pfeiffer likes to add an extra flair to the cooked ingredients of the salads. The chicken she doles out to top salads is spicy, and sometimes she makes her own onions with an original recipe: students often assume they’re caramelized, but this isn’t the case—they’re Bobbie-ized.

In the dynamic world of Pfeiffer’s recipes and salads, there’s one thing that remains constant. That’s the relationship with students.

“They mean a lot to me; the kids really mean a lot to me.” Pfeiffer says her favorite part of the day is when she’s out front at her station interacting with students. Putting a smile on a student’s face and making them laugh (and especially working to get them to break out of their shells—“I’m very sassy,” she says) is something she strives for: “I try to make everyone happy.”

When you go in for your next salad, McDaniel, remember, you can order any of Ms. Bobbie’s special creations, but when you smile, “that’s what matters.”