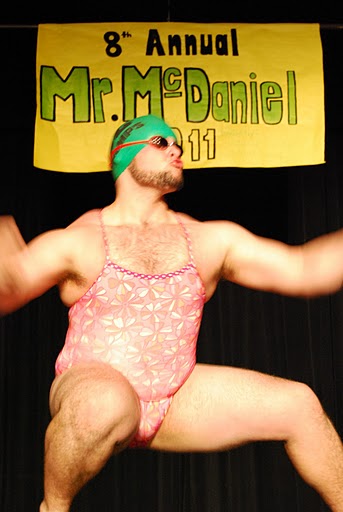 Inside Alumni Hall, students were belting out Katy Perry’s “Firework” while screaming and cheering for freshman Spencer Fothergill as he strutted around the stage in his women’s one-piece floral pink bathing suit.

He wasn’t just the crowd favorite, but the judges’ as well, as he was crowned Mr. McDaniel Thursday night over six other worthy contestants. Each participant had to compete in GQ wear, swimwear, athletic wear, and a talent portion, along with answering a question each round, ranging from their most embarrassing moment at McDaniel College to their favorite body part on a girl.

Fothergill also wowed the crowd during the athletic wear competition where he demonstrated his flexibility with a split. For his talent, he teamed up with two other contestants, fellow football teammates, to perform a self-written rap.

“My favorite part was having to answer the personal questions,” said Fothergill, “and the dance-off.”

The co-host, junior Chelsea Watkins, thought the show was a big success.

“His bathing suit was amazing,” said Watkins, referring to Fothergill. “It definitely won the competition for him.” She looks forward to next year’s competition and the surprises that come with it.

“I think it’s crazy they picked me,” said Fothergill, “I didn’t believe it, but it was so much fun and I am honored to be called Mr. McDaniel.”

What You Need to Know About the McDaniel Showdown Talent Show