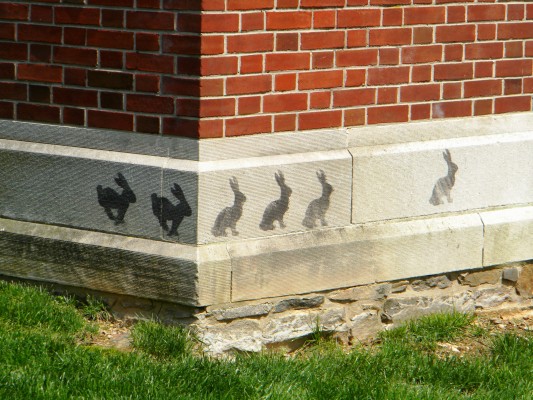 Check out Pictures Speak Louder to see a gallery of bunny pictures! Photo by Krystina Shultz. Check out Pictures Speak Louder to see a gallery of bunny pictures! Photo by Krystina Shultz.

Sometime in the early hours of the morning on Monday, May 2, bunnies were painted all over campus by a group of 12 students. Throughout the following weeks, the sanctions (including seniors not being allowed to stay for Senior Week) had campus buzzing with questions: Is it art or vandalism? What is a just punishment?

The final decision on the sanctions finally came to a rest with seniors being allowed to stay for Senior Week. This decision came after much back and forth between administration, students, and faculty on the student’s behalf.

What was the motivation for this act? Junior Darcy Elburn, one of the students involved, said, “I wanted to create a surprise street art installation and film interviews with students to test the shock value of street art and its ability to construct meaning and dialogue from repeated images. Basically I wanted to know if I could get people involved in a discussion.”

So why bunnies? One of the students involved who requested to remain anonymous explains that it was inspired by a made up story “about a little bunny who lived on the sidewalk and how people would walk down the sidewalk and be so focused on their own lives that they wouldn’t see the bunny and step on him.”

At a Soap Box on Friday, May 6, which attracted nearly 30 students, senior Annie O’Grady said, “Sometimes we get so wrapped up we don’t notice things. She wanted people to notice there’s something outside our own lives.”

In the art versus vandalism debate at the same soap box, senior August Matzko Sangster said, “The students demonstrated a lack of judgment by blatantly committing vandalism. It’s not up to us to determine the punishments. Students done goofed.”

Rafael Seyum chimed in, “I think it’s art. They’re using the wall as their canvas. But I think they should have used common sense. Although it’s art, it’s wrong. It’s graffiti. They’re giving other students the sign that it’s ok to tag anything.”

Regardless of whether it’s art or vandalism, it is undeniable that there have been costly damages.

A second student involved who requested to remain anonymous said, “The facts are these: did we paint on the buildings? Yes. Did we believe the paint could be easily removed from all surfaces? Yes. Did we do it maliciously? No. It would have been another story if I had spray painted “McDaniel college sucks” on buildings… We did not do this maliciously, have fully cooperated with the administration, came forward saying we had painted them and offered to clean and pay for their removal and I believe that it should show the administration that this wasn’t a case of vandalism but innocent stupidity.”

At the Soap Box, Director of Residence Life Michael Robbins said, “I don’t have any difficulty believing they didn’t set out to damage things… I get that it was an accident. It doesn’t change the fact that it costs money and takes time… Physical plant doesn’t have time to deal with 206 bunnies. The rain did not work.”

A third student involved who chose to remain anonymous says, “Not only did we offer to clean off the bunnies, we were already fully prepared to do so the following morning. We have offered many times, but the administration has made it very clear that we are not allowed to touch the bunnies.”

Elburn says, “I think that we should first have to clean off the bunnies that are on basic surfaces (sidewalks, brick, etc.) and then work for Physical Plant to help clean more complicated surfaces (Limestone, Marble). If any surfaces can be proven to need outside contractors to be cleaned we should obviously pay for this service.”

Robbins says, “I think that that because when it comes to some cleaning stuff if you don’t do it right you can really mess it up and the college didn’t want to risk that so close to commencement. You paint limestone, it doesn’t come off that easily.”

Rumors flew around campus about exactly what the punishment would be for those involved.

In response to an email, Dean Elizabeth Towle commented, “Because the bunnies/graffiti situation overlaps with the College Discipline Process, neither Dean Gerl nor I are able to talk with you about the incident.”

Elburn says, “I am receiving sanctions which include: Removal from campus housing for the remainder of the semester, Disciplinary probation, 40 hours of community service on campus or in Westminster only, writing an apology letter to physical plant, and payment of restitution to the college for damages.”

Senior Matthew Bisenius, another student involved, said on May 11 that “On Friday afternoon, we were removed from residence halls. On Monday afternoon, I was told that I would not be able to return to my resident hall for the rest of my time at this school. This has been difficult for me as a resident of Connecticut without a vehicle, but earlier today, we seniors were informed that we could return to our dorms with a return date depending on individual circumstances. I am writing a letter of apologies to the physical plant. We will be splitting the restitution for damage among the twelve of us involved, but we have not been informed what the cost of restitution is yet. This is particularly concerning for me as I cannot get my diploma or transcripts until after I have paid the restitution fee.”

In addition to the Soap Box, Monday May 10 from 7:30 p.m. to almost 9 an estimated 50 students knocked on President Casey’s door and discussed the matter.

The first anonymous student involved said, “The student response has been great. I know it really means a lot to us that so many students are being supportive of us as we go through this process.”

Elburn says, “I am very disappointed in the response not because of the punishments…[but] because of the way that the disciplinary process has been handled. In the first few days after this event we felt voiceless, helpless …Even later when we were finally allowed to explain some of the concept behind this act I feel that it was not taken into account or considered and we were constantly met with contradictions and miscommunications.”

The first anonymous student involved said, “Honestly, I am very shocked about the response of the administration. They treated us like criminals, and we never had any ill-intentions or malicious thoughts when doing this. This was meant to be light-hearted and thought provoking… None of us have a previous record, we are all good students, highly involved all over campus, and overall good people. I truly believe that we are being treated unfairly.

Obviously looking back, I wish this could just have never happened…We should have tested the chalk paint on multiple surfaces, not just one… but people make mistakes, and we would have never done this if we thought we would be destroying anything on our campus – that’s exactly the opposite of what we wanted.”

Bisenius said, “The petition, the spontaneous gathering on Dr. Casey’s yard, the movement on Facebook, this has all proved to me something that I had all but given up on, that our students can be involved and that involvement can make a difference.”

This incident has the campus thinking, discussing and even meeting to discuss. Much has been learned by everyone involved. Here’s to the end of a year that was anything but boring.

Students, Faculty Not Seeing Eye to Eye over Stenciling Projects