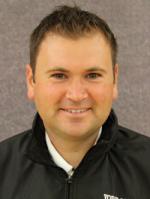 Steve Corrieri’s whole life has revolved around the game of soccer.  He started playing when he was around four or five years old, growing up in Carlisle, England, and played professionally for the professional soccer club in his hometown.  Corrieri’s next step in his soccer journey has taken him to McDaniel College, which last month announced his hiring as the school’s next men’s soccer coach.

Corrieri’s hiring comes after the sudden departure of long-time coach Jim Reigel, who resigned after the 2012 season for personal reasons, according to McDaniel Athletic Director Paul Moyer. He declined to go into more detail about Reigel’s resignation.

Junior Goalkeeper Zach Nibbelink said that Reigel’s resignation was a much needed change.

“The program was in need of new ideas…A change of pace,” he said.

Corrieri brings plenty of soccer experience to the table. He has spent the last six years as an assistant coach at York College in York, Pa. During his tenure at York, the team won four consecutive Capital Athletic Conference championships and made the NCAA Tournament in all six years, including two Sectional Semifinal appearances and one Elite Eight appearance.

Corrieri’s success at York drew Moyer’s attention, and after conducting a nation-wide search and interviewing some of the best coaches in the country, he decided that Corrieri was the best fit to lead the McDaniel program.

“We went through a process that advertised nationally, interviewed top candidates over the phone and in person, and thought he was the best fit.” Moyer said.  Corrieri, he said, has, “tremendous soccer knowledge, great coaching experience, strong knowledge, and experience in NCAA Division III and good knowledge of the high school and club scene in our recruiting region.”  Moyer said.

Corrieri said that his desire to be a head coach and the school’s location near his home in York were motivating factors in deciding to take the McDaniel job. He stated that he enjoyed his tenure at York, but thought it was time for him to try being a college head coach.

“I was new to the college soccer environment, York was a great place to learn the ropes, from coaching, understanding the Division Three landscape and getting experience of the NCAA rules and regulations,” he said.  “After winning 3 conference championships, consecutive trips to the NCAA tournament where we reached the Elite 8 twice and Sweet 16 I felt I was ready and prepared for the challenge of being a head coach.”

Corrieri’s soccer journey began when he was first started playing at about four or five years old, while growing up in Carlisle, England. In 1994, when he was 18, he started playing professionally for Carlisle United FC of the third tier of the English Football League system, and played for them until 1996. For the next five years, Corrieri played for semi-pro teams in England, Scotland, and Wales. In 2000, he graduated from Wolverhampton University in Birmingham, England, with a degree in Marketing Management and Sports Industry. During his college years, he played for Rhayader, a semi-pro team in the League of Wales.

After graduating from Wolverhampton and the end of his playing career in the U.K., Corrieri came to the United States to pursue a coaching career.  Corrieri served as head soccer coach at Susquehannock High School in Glen Rock, PA, from 2002 through 2006.  While at Susquehannock, he led the school to four division titles and two county championships during his tenure, winning two ‘Coach of the Year’ awards from the York-Adams Interscholastic Athletic Association.

Moyer said that based on his previous coaching success, he believes that Corrieri is the right fit for the Green Terror program.

“Coach Corrieri is knowledgeable, talented, experienced in the field and driven to excellence,” he said.   These facts, he added, represent, “A successful combination of personal attributes for any college coach, and are hallmarks of our most successful coaches.”

“I felt that since he had previously assisted at a winning program, he could bring the winning culture to our program,” Forka said.

Bringing that winning culture to the Green Terror program will be a challenge for Corrieri as the team enters spring practice. The team is set to lose eight seniors to graduation from a squad that went 6-10-1 last season, including four who started a total of 64 games between them in 2012. Also, the team has endured four straight losing seasons and has not had a winning season since 2005.

Fortunately for Corrieri, the team’s top scorer and goalkeeper form last season will return. Sophomore Shane McCracken led the team with 11 goals and 22 points in 2012, finishing fourth in the conference in goals scored and fifth in points. Nibbelink was strong in goal last year, with a save percentage of 75 percent and only yielding a 1.71 goals per game average last year.

Corrieri said his philosophy is “hard work, commitment, and honesty.”

Spring practice has started for the team, which has given them some time to adjust to Corrieri and his philosophy.  Forka said that training has been competitive and hardworking.

“In the few months that we as a team have worked with Corrieri, training has been tough, but very efficient and productive as well,” he said.

In August, the team will join the Green Terror women’s soccer team on a two week trip to Costa Rica, where they will play exhibition games against some amateur and professional teams.

When asked about his goals for the team next year, Corrieri said that he is not trying to set any goals for his first year.

“I want us to be competitive, be proud of who we are, work hard and for teams to walk off the field after playing us knowing that they were in one heck of a game,” he said.