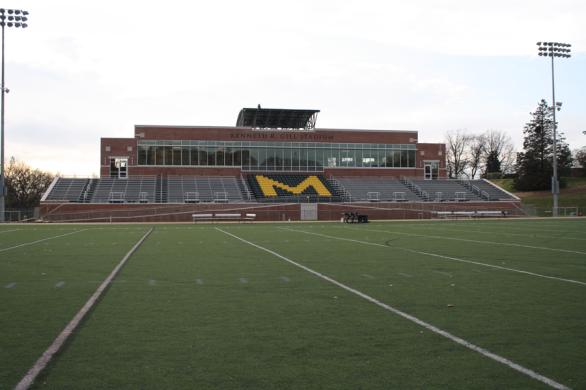 This Friday night McDaniel College will be hosting Relay for Life, the school’s largest student-run charity event. Each year volunteers make teams and compete to raising money, all of which goes directly to the American Cancer Society. Participants walk laps around the track for 12 hours, the idea being that at least one member from each team is walking at all times. At the same time there are concession stands selling snacks and drinks and other various fundraising activities, all to support the event.

Typically the event is held at the track. Makes sense, right? People walking, playing sports, etc. Sounds like a solid venue to me. Last year’s event was held in the gym, but it is important to remember that a year ago our stadium was undergoing construction for the new renovations, and thus it was essentially unusable. Last year alone Relay for Life, by taking place in the gym, raised significantly less money. Not only that, the event was not nearly as big of a community event because it was indoors, out of the eyes of campus members and the community as well.

Early this academic year (in October 2012, to be exact), the Relay for Life committee booked the stadium for this night, hoping to return to the old venue in order to make the event a huge success, as it has been in years past.

Three weeks ago the Relay committee was notified that a certain sports team would need the stadium that night for practice, and therefore they would have relocate Relay for Life entirely.

The athletics department knew for seven months that Relay wanted the stadium, yet they waited all this time to notify the committee that they would be requiring the field that night.

It goes without saying, but I’m going to say it anyway: hogwash.

Committee members scrambled to find alternatives. One student proposed a number of alternatives to the sports team involved, including moving the practice to an earlier time slot or moving practice to one of the grass fields here on campus. All proposals were turned down or ignored.

Does anyone else smell that? It smells like hogwash.

The proposal to move the team’s practice to an earlier time apparently was not plausible because too many athletes have class at that time. Okay, that sounds like solid reasoning. But let us note one other important thing: how many of you have ever had a class with an athlete where that athlete, in a heartbeat, skips class or leaves early for practice or a game? Hogwash.

The proposal to move practice to a different field was turned down because, to the athletes, the grass would feel different. Well, yeah… sure. Grass feels different than turf. But let us note one other important thing (picture me screaming this angrily): THIS IS RELAY FOR LIFE WE’RE TALKING ABOUT. It is the largest charity event of the year for this school. This one night alone can realistically raise upwards of $30,000 for the American Cancer Society, and it has to get moved for the entire night because grass feels different? Hogwash!

I can keep going. One committee member proposed the idea of at least having the ceremonial opening lap, traditionally done by actual cancer survivors, done around the baseball field area, up the hill from the athletic stadium. This one got turned down, too. Anyone want to venture a guess as to why? The music that Relay would be playing during the lap would be too distracting.

I… how… wha – . I can’t even. I have no words. If I understand this correctly, this proposal was rejected on the grounds that music would distract a sports practice. If this was practice for a regional spelling bee or a yoga competition I would understand, but for sports?! An eight minute period of music during practice (not a game) would be too much of a distraction for the sport team. Hogwash.

The Relay committee was told that they were more than welcome to hold the lap on the track despite practice going on. But in doing this it is important to note that the cancer survivors would have to do so at their own risk. That seems fairly disrespectful, does it not, fully allowing a number of inspirational survivors, the center of attention for the night, to walk the track knowing full well that at any moment an errant ball could come flying at them from any direction? And at the same time, how much sense does it make that a song up by the baseball field would be more distracting than a number of cancer survivors walking the track while 300-400 students and community members watch and applaud loudly? Hogwash.

What does this all say about the values of McDaniel College’s administration and the emphasis placed on the athletics department? That despite months of planning and organizing by Relay for Life, McDaniel College will sanction this with minimal hesitation? That apparently a single sports practice is more important than a huge and unifying charity event? The school has made very public their goal to look good in the eyes of the public and of the community. Does this phenomenon say apparently a school athletic team’s practice better helps the image of McDaniel College than does Relay for Life?

Say it with me now, one more time: “Hogwash!,” but know that in all cases of my use of this word I could also be using another strong word, one pertaining to another, larger barnyard animal. One that begins with the letter “B,” and one that, colloquially, has a connotation that portrays anger and bad temperament.

Students, come out to Relay for Life in the gymnasium this Friday night, starting at 6pm. Come spend some money to benefit the American Cancer society. Greek organizations will all be there fundraising with games, food and activities. Various student committees will be there raising money as well. Let’s show this community what we as the student body are capable of, and let’s make it obvious what our student values are. We can still make this event an inspiring and successful night of fundraising and fun. But most of all, come help this be a night of hope for everyone affected by cancer.

Where in Westminster: Planet Fitness